Choose one - For Amanda 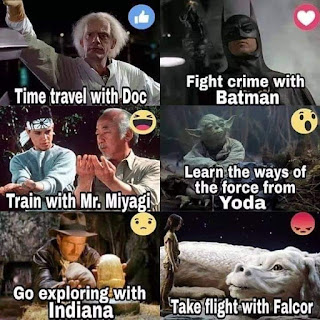 This showed up, as most things in life do, as a post on the Book of Face.  You are supposed to pick one and then move on with life not giving it a second thought.  That, however, is not how my mind usually works.

When I saw it I first started typing up a paragraph and decided that my response was going to be entirely too long to post as a reply and I wanted to do it here.  This would also serve the purpose of getting in my monthly blog post on the amazing grrouchie dot com site.

We do have six choices and I'm sure some out there would consider this a hard choice to make.  To me there is only one real choice and while some might seem enticing, none of them actually appeal to me like the one true choice.

Let's start by getting rid of the really crappy choices.

Take Flight With Falcor is off the table as the worst of all of them.  I was never into the movie when I was younger and I still really don't see the appeal of it now that I'm older with kids.  Falcor, you are the weakest link, good-bye.

Next, let's knock off one that is only on here for nostalgia purposes and that is Train with Mr. Miyagi.  The only reason to pick this one is so that someone can give you permission to Wax-On and Wax-Off and that is it.  You will not learn real karate and you won't come to discover the true power behind the crane kick.  No, you will just wash some old dudes car and get beat up by an old Japanese man.  I love you Miyagi but this choice is not a choice at all.

Two thirds of the choices are gone and how do you feel about where this is going?  Was your choice gone?  Hopefully not but it will probably disappear soon.

Listen, we all love Dr Jones but you know what we don't love?  Being hunted down by Nazi's or fighting indigenous people and aliens.  We don't like sword fights and we don't like getting shot at or having to outrun huge boulders.  These are things that we love to watch on the big screen and imagine we are Indy's sidekick but the truth of the matter is that you wouldn't make it and even if you did you wouldn't look as cool as a younger Harrison Ford standing there with his iconic hat, whip and gun and a girl on his arm.  No, you'd look like an old, fat and sweaty out of shape being who just got their arse whooped hardcore.  Bye-Bye adventures.

Fighting crime with Batman was originally going to be my choice as my eyes scanned the panels and then I realized that everyone who fights crime with Batman has some traits that I do not have and some that I do not want.  I am not a super skinny and athletic young boy dressing up in spandex with a fum nickname.  I am no Boy Wonder and I don't want people to think "Boy I wonder what that creepy dude in the dominatrix outfit does to the small boy he brings around with him."   I also don't want people to think that I'm the centerpiece in a NAMBLA buffet.  Also, how many times has the sidekick either come up missing or just get outright murdered when fighting alongside Batman?  And make no mistake, I'm not likely to end up with Cat Woman hovering over me and purrrrring me to completion.

Two thirds of our way through this list, did you expect we would end up here?  Is your de-facto choice gone or is it still sitting there with you cheering that I pick it so we can be Eskimo brothers?  Er, that took a weird turn.  Let's get to the biggest loser (you know, second place).

There is ONE reason that this choice came in second place.  Before I get to that reason I would like to point out that when I made my initial choices and rankings I pretty much left them as I thought of them instead of putting too much thought into them and changing my choices up until the point where I was typing this up.  So, with that said...

This one failed to get eliminated earlier because I wasn't paying attention.  I made my first set of cuts with a desired goal in mind and as I got closer to my ultimate choice I did something which I failed to do at the beginning, and that was almost my downfall.

Time Travel with Doc made mistakes that I didn't catch.  First, the spelling was off.  This was supposed to say Time Travel with THE Doctor.  This is what my mind told me it said, but I was wrong.  Also, if I looked at the picture earlier I just kind of thought I would have been staring into the dreamy eyes of David Tennant or having my heart warmed by the goofy but amazing Matt Smith.  No, I was looking at a much older guy who wasn't even the focus of the movies he was in.  Doc Brown you are no Doctor and because of that you have to be cast aside for the obvious choice in this montage of pictures.

Learn the Ways  of the Force from Yoda.

Yoda is the single best thing from the entire Star Wars Franchise.  Proof is in the pudding and in the Mandalorian where a being that is affectionately referred to as Baby Yoda has taken over the meme world by storm.  If this was Baby Babafet no one cares.  Baby Skywalker and no one blinks.  Baby best thing since sliced bread? Baby Ewok?  Nope.   But Baby Yoda rules the current world, probably the multiverse as well.

Thus older Yoda takes the cake and trains me, a young stumbling grrouch to go from couch potato to force wielding, light saber dueling, Dark Side Ass Kicker.  Yoda never had a chance to lose unless he was up against The Doctor in which case I would probably Time Travel with my Doctor to the Star Wars Universe to kidnap Yoda and go on a crazy LSD influenced journey.

Thanks for reading.
Posted by grrouchie at 5:22 PM