Week 5 of 6 is completed with StepBet and I'm still in the running.
I made sure to knock out everything I needed before the SuperBowl so that I could have a nice relaxing day.  After the Superbowl I still had to do a 45 minute walk to make sure I got my 10k in but all is good.  I am keeping track of my Steps for the year in a separate tab that you can get from the main page or you can follow it here. I am updating it weekly to make it easier for me to keep track of. 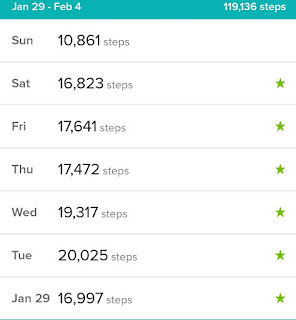 I'm not sure what to think as it has only been one week.  After finishing the first week I was at 71% which is about what I'm supposed to aim for.  Anything less means it is too difficult and once you are hitting 90+ consistently then it is too easy.  I feel that leaving my goals at what they are for the entire month I'll jump up to that 90 percentile but at the same time I don't want to start changing them just to make it more difficult on myself.   There were several spots that I missed only due to illness or just because I didn't feel like putting my focus in that direction and changing two things would have put me in the mid to high 80's.
Whatever, this is a learning process and I'm along for the ride long haul.
I don't want to dig too deeply into it and I figure I'll do that after the first month.

I hadn't placed a sports bet for a while and I was not planning on betting on the game but the day before the Super Bowl my mother called me and asked me if I was interested in betting on the game.  At first I thought she meant that she wanted to make a wager against me for something but after a brief conversation it turned out she was interested in putting money on the actual game and wanted to know if I'd go in on the bet with her.  Her only other previous bet was a random occasion when she gave a friend $10 to place a future bet on the Steelers to win the Super Bowl and that just so happened to bet the year that we went and beat the Cardinals so her bet paid off.

However, she knows nothing about sports betting so I had to explain some things to her.  She told me to think about it and get back to her with whatever bet I wanted to make, she would leave that in my hands.

At the time we had that conversation she was talking about each of us putting up $50 and just seeing what happened so when I called her back and said i'd be willing to place the $100 bet she said "ok, $100 for each of us" and I'll be damned if I'm going to let my mother seem like she has more balls than I do so I agree'd to it.

I told her that I decided I wanted to bet the Eagles on the money line just because I felt like either team could pull this game out based on their offenses and that the bet had the best payout odds. I had thought about parlaying it up with the Over but my balls were not big enough to do that with a $200 bet which was by far the largest I have ever wagered on any game or even spread out over all my bets at one time.

I'm happy to report that everything worked out well in the end and now I just have to wait until I hit up a Station Casino so that I can cash out my winnings and pay my Mother off.

Hope y'all are having a great week and hopefully I have something more entertaining to write about than this boring crap next time my fingers get the itch.
Posted by grrouchie at 9:15 PM