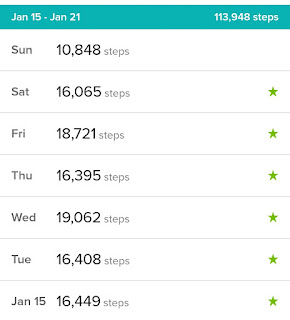 Another week down and another week where I hit my 10k goal every day.  As you can see I did truly rest on Sunday with under 11k steps.

Mainly I had the day off and spent it with my toddler who officially just turned 3 yesterday.

A decade ago I would have bet anything that I would never get married and never have kids.  It was a goal of mine to avoid all of that and now, here I sit, with 2 kids and a 3rd on the way and an amazing wife.

I would not change anything about my life and while occasionally I do miss my former freedom to go out and play poker and do whatever I want, I love the stability of having a family and people I can look forward to going home to every single day instead of hitting up those Asian Massage Parlors in Chinatown :) 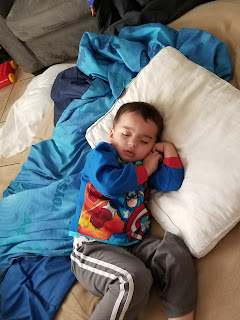 The other day I came home and my toddler decided to explain the plot of the TV show he was watching to me.  I listened in amazement as he was telling me about a garbage truck and another vehicle sleep walking and something about Halloween.
Then I watched the show with him a little bit and I'll be damned if it didn't have a sleepwalking garbage truck that ran into another car and flipped him upside down and then the next episode had Halloween references.

Yep, he has watched these shows a few times and knows them by heart and felt the need to tell me all about what was going to happen.

The mind of a child amazes me every single day.
I am constantly in awe.

In 2 days we record the official episode 1 of our podcast which has a video game premise.  We did an Episode 0 at the end of December and it finally went live on iTunes and Google Play sometime in January.
It is rough and a work in progress but we are having fun with it and I'm really looking forward to Friday.

For anyone who wants to listen feel free to look up Backlog Busters and you'll find us there.
and here is our Artwork that was done by Adam Leonhardt.  Feel free to look him up on Twitter @theartofadaml 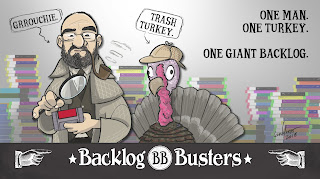 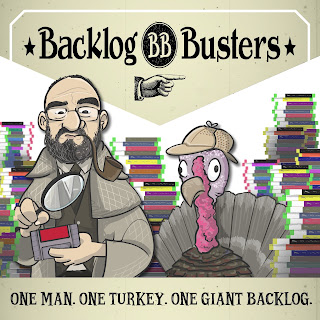 Posted by grrouchie at 9:11 PM