Stepping it up - 2 Weeks in

Yeah, I know that I'm just approaching 3 weeks worth of making sure I get my steps in but honestly I am feeling good about it.

Strike that - it bloody well sucks.

Last year I had a goal of 10k every day and I did really well until my Plantar Fasciitis started acting up horribly.  Then sometime in September or October I absolutely destroyed my Fitbit.   So, The year was wasted but near the end of it I started to feel better.

Once the pain was gone I decided that I needed a new Fitbit and that I was going to resume my 10k everyday to make sure that I get more exercise in and start working on being a healthier me again.

So, New Years Even I bought a new (to me) Fitbit from a pawnshop for a great price and on January 1st I started working on my goals.

Then I decided to get stupid and signed up for StepBet and they gave me my goals where only one day a week am I allowed to get under 15k.   Oh well, I have money riding on it so what the hell right?

Here I am, January 18th and my feet are killing me.  I'm regularly having to take extra walks to get my steps in and I am feeling it.  I know that as I get into the routine and start losing weight that it will all get easier and I know that in the long run this is all good for me. I get it, that fact is not lost on me.
But damn, it sure does suck getting there.

So Week 1 was a "warm up" week where you can fail and it won't count against you.  So, while I didn't hit my goals it wasn't 100% my fault because I signed up on the last day of Week 1 without knowing what my goals would actually be and during this time period I was just focused on getting that 10k goal. 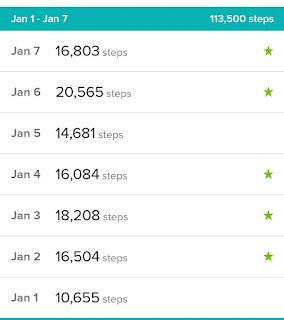 If I were signed up earlier and knew my goals this week would have been pretty easy to salvage.  The 14,681 day would have been easy to add on a 1k step walk at the end of the night to hit my goal.  Then on the 18,208 day I could have easily added an additional 500 steps or so to hit my stretch goal thus giving me 2 days with the stretch goal and only one day where I was under my minimum (the 1st).   Easy Peasy. 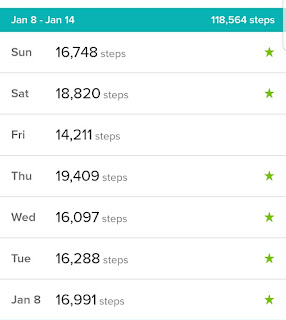 Friday was the day where I failed (but you are allowed one "rest" day per week) and Thursday and Saturday I hit my 2 mandatory stretch goals.

However - the day that started the suck off was Tuesday.   You see, I was off of work Monday and Tuesday and on my days off I need to make sure that I am taking a couple of good walks through the day to hit my goals.  Tuesday I did not get many steps in and so after we all got home from doing whatever the hell we did that day I only had like 3k steps in and needed to get another 12.5 in.   Thus I went for what I deemed would be a long walk.
2 hours and 4 minutes later I had hit my daily goal and was tired as hell.
It wasn't until the next day that I learned what kind of punishment this fat man put his feet through - they were sore as hell and getting through my work day sucked.

It took a couple of days for the soreness to go away but eventually I started feeling mostly normal again.   However, having to push myself every single day is a pain in the ass but i know in the long run it will be worth it and dammit I am just not willing to lose the $40 that I paid to sign up for this StepBet.

This particular game started with 1892 players and with less than 2 real weeks down we are down to 1724 people left in it.  So we've lost over 150 players already and I'm hoping as the weeks go on that number continues to climb a good deal more so that when all is said and done I at least show a minor profit from this 1st 6 week challenge.

I already know that I will sign up for a second one after this and that will push me to Mid April or so and at that point I'll probably have to take 3 weeks off from the competition and just try to focus on getting 10k every day so that I can try to get my full year in.

The reason I'll have to take the time off is because when our baby girl is born I'll be taking 3 weeks off of work to help my wife out with the baby at home and I just don't have the confidence that I'll be able to hit those big goals for 3 weeks straight without being at work and being forced to talk around all day there.

Hopefully in the near future I'll get a day to play some poker so that I can start reporting to y'all on that front especially since this whole bloody thing was started back in 2011 (though it actually went back further when I was poker blogging on All Vegas Poker and then PokerNow before they were both bought out, swallowed up and destroyed) as a poker blog.

Also hoping that one of those gaming sessions is with everyone's good buddy Lightning36 when he hits up Vegas even though I'll be hanging out with him in a non poker fashion at some point.

It's 9:30 and my toddler is almost sleeping which means that shortly I'll be able to sneak off into another room and get a little video game time in.   The joys of being a parent!!

Posted by grrouchie at 9:33 PM