My Toddler lost his eye sight this morning

Parenting can be cruel and unusual.  However you keep trucking for love and, if i'm being honest, because hopefully one day those children will blossom into amazing adults who will take care of you when you are old and decrepit pinching nurses asses in the old folks homes.

Am I even allowed to type that last line in this day and age?  Is someone going to go public and tell people that i'm a filthy sexual abuser and hashtag #metoo and ruin the rest of my life?  I walk a fine line just owning a penis anymore and i'm afraid to be myself and tell my jokes.

However, I didn't come here to talk about that.  Today I had a story to tell about my poor little toddler and the atrocities he had to suffer, to endure (and I'd really appreciate if y'all didn't look ahead at the horrific picture that I had to post involving my toddler until the end.  Just read.  This isn't a book.  This post isn't going to be 30 pages long.  It is short and to the point.  Take your time and get there naturally for crying out loud.


Today was like any other day where I had to wake up and get the pre-teen ready and take him to school.  Luckily this was one of the days where my wife worked late so it isn't necessary to wake the toddler up and convince him that he wants to come with me.  Yes, I said convince as he is very bull headed (it runs in the family if you can believe that).

So I open the door to the pre-teen's room and let him know he has to wake up and get ready and when I shut the door the toddler has his eyes partially open and asks me if I am taking brother to school.
I explain to him that I am and he informs me that he is staying home while I do it.

I'm not making this shit up, these are conversations I have with my toddler daily.  He TELLS ME that he is staying home while I take his brother to school.  So, I inform him that he can stay home and watch some TV since mommy is at home as well and a few minutes later i'm waltzing out the door taking his brother to school.

When I get home my toddler is more than awake and informs me that he wants some cereal but alas we only had a kind that he doesn't particularly like.  I ask him if he wants some toast with Peanut Butter and he thinks this is a splendid idea.

Into the Toaster Oven the two pieces of bread go and a few minutes later there is a ding ding ding-a-ling informing us that the bread has magically transformed into toast.

The ding sends the toddler into euphoria and he exclaims "Yay, my toast with jammy (pronounced Jam-y) is ready.  As I'm pulling it out and putting it on the plate I ask him if he wants jammy or if he wants peanut butter and being the son-of-a-grrouch that he is he chooses wisely, peanut butter.

So I spread the peanut butter over half of each slice of bread and then fold them in half.  I put them on a plate and bring them to the toddler who gets excited and immediately starts chowing down.

At this point he lays down on the extra large pillow/sac that we have in the living room and is eating while watching a little bit of Car Patrol (which you can find on Amazon streaming services).

At this point I start messing around with my phone to check all of my social media things like the Book-of-Face, the Twitters and my random 32 email addresses.

A few minutes later I hear a scream from the living room.

I look up but cannot see him over the couch and he continues to hell that he can't see and that he needs help.

Panicked I run into the living room ready to help out my poor toddler in distress and he starts laughing.

The following picture is what I find. 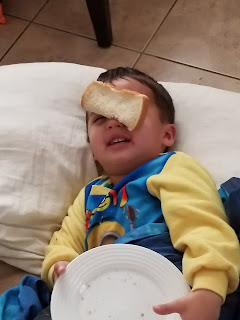 I'm not making this up.
I'm not shitting y'all.
I didn't stage this.

This is my toddler.
This is his sense of humor.
He thinks he is funny.
He put a piece of toast on his face, covering an eye and then pretended that he couldn't see as a rib because he thought it would be funny.

I am a lucky man that this is the child I have to deal with every day of my life.
I am blessed.

And folks, that is what I came here to tell you today but after I picked him up from my in-laws house he added to the stories.

He pointed to a spot on my window that is most likely bird shit and told me my car was dirty.
I told him that I would have to clean it soon.
He asks me "With water?"
I say yes, with water.
He then tells me to was it with water from the gas-station, you know, because all 3-year-olds know about car washes.

I went to high school with people that couldn't piss without getting it on their shoes and now I have a toddler that pulls practical jokes and tells me to take my car to the gas station to get it clean.

I'm probably going to be in trouble when he becomes a teenager.

Posted by grrouchie at 8:30 PM