So week 4 (my 3rd real week but since the game is in week 4 and week 1 was a no-lose week I am catching up to sync my naming with the actual week of the Game - Think of it like the Samsung Note skipping a number to catch up with the rest of the Galaxy Line or the Iphone skipping 9 and going to X) of my StepBet game was quite the interesting one.

I had the weekend off which meant that I would have 5 straight days to hit most of my goals and then I'd have the weekend to hit a regular day and then have a day off.

On Monday I had some pep in my step and hit my stretch goal and then as has been happening lately after getting that many steps in the next day my feet were a little tired and sore and I ended up only hitting my base goal.   However, Wednesday rolled around and I once again made sure to get the last few steps in at the end of the night to hit my 2nd stretch goal (and you have to hit two of those per week).

That all went south when I discovered that I had one more vacation left for my work year and I took it on Thursday.  Now, I had planned on still getting my min of 15,442 in on Thursday and even made sure to move a little bit earlier in the day so that come the end of the evening I wouldn't have to do very much to hit it.  None of that happened.  Come the end of the evening I ended up needing over 5k steps just to make sure I got my minimum of 10k in to maintain my 10k every day for 2018.  I don't exactly know how the day went south and what happened that I just never got up and moved around but I do know that at the end of the night I was checking to see when my wife would be coming home and I realized I was running out of time so I started pacing and dancing and moving all around the house just to get those last steps in and hit 10k.  In that regard I was successful, but I did not hit my StepBet goal and I wasted my lazy day which meant that over the weekend I would have to make sure I moved more because there was no free day there.  Even though I was not working I had to hit my 15.5k goal both days or I was out and essentially wasted my $40 entry fee and I'll be damned if I'm going to lose that money.


I am still on pace to hit over 500,000 steps in January which is more than I assumed that I would get and it puts me on pace to break 5,000,000 steps for the year which would be a pretty cool number to hit honestly.  But, that is more long term so we will see where this takes me.

As it stands I have two more weeks worth of my first StepBet to go and I will see what kind of profit that actually comes back to me.

One of my goals was to use the profit and after a few games invest in the membership so that I could eventually fund a second and maybe a third congruent game.  However, I'm not exactly sure how feasible that really is especially if I want to make sure that everything I do after this first game is fully funded by my participation and winnings. 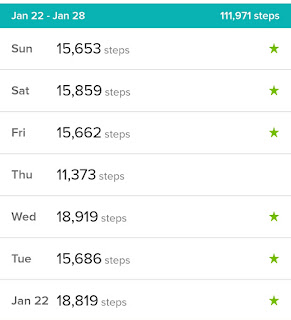 As I type this it is now official that I am down to the final two weeks of the competition.
I find it odd when I type up part of a blog entry and then come back it it a couple of days later and speak as if time had passed when the reality to you, the reader, is that this is just the next paragraph but to me I know that 3 days have passed and now my reality has changed and sometimes this will change the voice of the post right in the middle of it.
whatever.
I hit my goals and I have two weeks left.

By all my calculations the game has also had enough people fail that we have passed the break even point (to be fair, StepBet does state that even if no one drops out everyone is guaranteed their money back) and now I start earning a couple of pennies every time someone else fails.   This is the exciting part honestly, even if I only end up with approximately $5 by the time this is over.
I will have set my goals higher than I have before and I will have conquered them.
And in two weeks my goals will be even higher.

I do realize there will come a point where the goals become unobtainable and I'll have to take a week or two off and do a lot more resting so that those goals can become lowered so I can start up again.


And - another day later and just a minute before I hit submit, all of the children in the house are sick.
This could, potentially, make for a an interesting end of week 5 or week 6.
If I come down with this I'll still have to manage to drag my sick ass around enough to get my steps.
Hopefully it avoids me but only time will tell.

Email ThisBlogThis!Share to TwitterShare to FacebookShare to Pinterest
Labels: StepBet