I'm an avid gamer.  Some of my earliest memories are playing Ms Pac-Man on an arcade machine in the Bar where my grandmother worked.  I was given quarters to feed into that machine and some pinball, but Ms. Pac-Man was what held my interest.

As the years went on I continued to play games as systems made their way into the house.  The first system I remember having was a Pong system which had a switch that turned Pong into Hockey.  These are my memories and if I can ever come across another of these systems I would be sure to own it just to satisfy the collector in me.

Now that I'm a middle aged, grey haired white guy (grey or gray?  I feel it could go either way but I'm not about to look up the proper usage) I still am knee deep into the hobby, but with a j-o-b I have been able to afford to build a tremendous backlog.

The last time I didn't own all of the current systems was during the initial Playstation era.  I bought the Playstation for Final Fantasy 7, skipping the N64.  However, I have owned all systems after that phase of my life.

This brings me to current life where I have a house full of systems that multiple people play on.  Both kids play on Playstation 4 systems.  I have an Xbox One X that gets used when my teen has friends visiting so that they have a system to hook up and play the latest Call of Duty.  Each of my kids has a Switch (as do I).  And I own, but the kids cannot touch, the Playstation 5 and Xbox Series X.

I have Game Pass Ultimate which I do believe my subscription ends in 2023 (or at least late 2022) and I have Playstation Plus for a few more months.  Those two subscription services make it so that I don't actually have to spend money on Video games very often, if ever.  I could, theoretically, never buy another game again and just play games that are available through those services (except for Nintendo Games of course).

I bring this up because all of my extra activity money has to come from my poker playing and not my paycheck.  The Paycheck is for household expenses only. 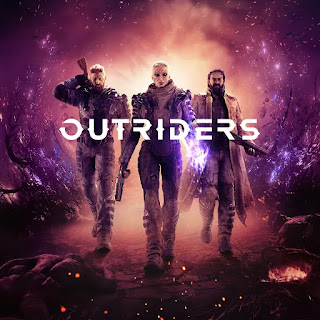 I only bring all of that up because today I say down with my boy to play some Outriders (available everywhere except for the Switch) and after about 30 or so minutes their servers crashed.  Per their Twitter account, multiple hours later, they are still working on trying to figure out why it crashed and re-build the infrastructure to help make sure it won't happen again.
My boy is playing it (or will be) on his Playstation 4 (bought for Easter by grandparents) and I am playing it on Xbox because it launched into Gamepass.  It is made by the same people who did Bulletstorm which is one of my kids favorite games.
So far the game is a fun mixture of gun play, bad story telling and equipment upgrades which means I'll probably put a couple hundred hours into it when all is said and done as I have been looking for a new game to fill my Diablo/Borderlands cravings.
So, because the servers were down I ended up going outside to take a walk and enjoy nature on my last day of vacation before being forced to return to work and be accosted by customers again.

At the beginning of my walk I ran into this little man, I will call him Franklin.
Franklin and I talked about how it was a nice warm day and how glad we are that "winter" is over.  Franklin is not looking forward to the next few months because he runs serious risk of dehydration in the desert heat if he cannot find good shade and a supply of water.
I promised Franklin that I would start leaving out a little dish of water in my backyard for him to get some much needed hydration should he ever wonder over to my neck of the neighborhood.  I gave him directions to my house, he then thanked me and scurried off into the drainage under the road.
I have serious doubts about my ability to remember to put the water dish out, but he'll probably be hit by a car before he can ever guilt trip me about my negligence.

On my walk I had plenty of time to think about the situation I am in and how to make it better.  There are many aspects of my life that I need to improve in and I'm going to start working on them instead of putting them off for the mythical tomorrow.

I still have weight to lose and am contemplating going through 75 Hard again. I'd like to lose another 30 pounds and get down to 200 even.

On the back half of my hour long walk I ran into some fun graffiti (and, honestly, thanks to google I just discovered that graffiti has two F's but only one T).

I hope this isn't just the super polite and super white version of the N.W.A. Classic.  Instead I imagine that this is advertising a grunge (I'm a child of the 90's and it will never die in my heart) garage band that is forming in our neighborhood by some of the local teens who aspire to have musical ability.

I assume that in the near future I'll start to see parts of their songs on TikTok and the police will get monthly noise complaints as they get together for a Jam Session after all of their homework is done and their parents disinfect the garage and put big black X's with Duct Tape to make sure the band is using proper social distancing procedures.  I mean, you wouldn't want to be the cause of your own band mate's demise, although I do suppose that is the shit that starts legends.  "Yeah, Franklin kept playing off key so we low-key gave him Covid-19 and now need a new guitar player."   Hell Yeah - Fart on Cops is going to make it big one day.

I'm drinking water to stay hydrated. I'm looking for a Futon for my gaming room so I can have a bed to sleep on. I'm checking the Outriders Twitter every three minutes to see if I can get some gaming time in before I hit the casino tonight for my last vacation poker session.

I'll have to remember to check Spotify daily for my new favorite band!  When they blow I want to say I knew of them before they were cool.

Posted by grrouchie at 3:15 PM