It's the proverbial Clean Slate where the past is wiped away and the future is at the end of a cloudy tunnel.

I didn't get this far in life off of my good looks and grammar!

The past 12 months have been full of hardships for myself but I am looking towards the future now.

I now have my family with me again, I love in the greatest city in the F'n world and I have a job that pays me more than I need and is as secure as any job is in this rough economy.

And, how can I forget, I have my Monster. 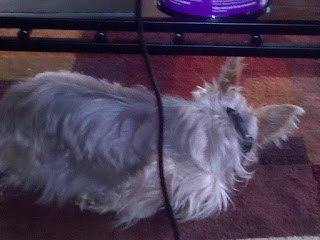 Even though he hates to have his picture taken.

Starting this next week I am going to be back on a set schedule at work which will help get me into routines that I need to be in.
I have a goal of posting a blog once per week about whatever is going on in my life - good, bad and ugly.
I will attempt to start going to the gym again.

That is enough of an intro - I now have to go eat some Doritos's and play some Video Games before the day escapes me.
Posted by grrouchie at 10:48 AM