I won my dog in a game of craps!

I know this doesn't come up nearly as much as it used to when my parents were kids, but I can remember watching movies that showed the dangerous side of gambling where people could bet anything at all.

People would go to Vegas and come home with someone else's car because in the heat of the moment that person threw their keys onto the poker table to call a bet with.

Being out here in Vegas for about 5 years now I do realize that none of this ever happens in actual sanctioned casinos.  Sure, it is possible for you to lose just about everything, but it's no where near as easy as it's made out to be in the old movies.

So, while the title of my blog is technically correct, it's no where near as cool as I would like to make it out to be. 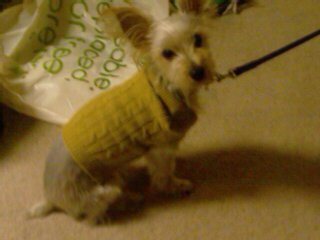 Mind you - I did not win him with the sweater - that was later added by an evil person who likes to play dress up Barbie with unwilling subjects.
But, that cute little guy above, Monster, is my fur-baby and the only reason he is in my life is because of a game of Craps.

Well, let me restate that as one of two reasons he is in my life.
As much as I love dogs and that excited look on their face when they haven't seen you for more than 20 seconds I would not have gotten one if it were not for the girl I was dating at the time.

But, now that he is in my life I cannot picture living without him.  It truly was the best game of craps that I had ever played and probably will ever play.

It was at Sam's Town for those of you familiar. They have this great set-up with a bet that I have not seen at any other casino ever, even ones owned by the same parenting company.
3 bets sit prominent at the center of the table.
All Small to the left, All Tall to the right and above it the All or Nothing.
You can place up to a $5 wager on any of them or all of them if you so choose and all you need is a hot roll to collect.
The All Small and All Tall pay out at $35 for $1 and the All or Nothing pays out at $175 for $1.

So, on that fateful night as the dice were passed to me I placed $2 on each of the numbers and I rolled for probably about 30 - 40 minutes or so hitting many numbers and many points.

I started my roll with somewhere between $100 and $200 and I walked away with $1175 give or take - a big portion of that from hitting the All or Nothing roll.
There is a lot of adrenaline that rolls through the body when you shoot the dice for an extended period of time, each role adding a little bit to your stack. But, nothing quite as exciting as needing one number for a big payout and finally nailing it - In my case it was Yo-Eleven.
Funny thing is that I hit it one other time as well when rolling but not for such a big payoff as I only had $1 on each number.

And, as a side note, in addition to Monster, my $1100 score was the reason I also bought my first Xbox 360.
We had gone out to look at renting a video game to play for the week and next thing you know I'm buying an Xbox, a 2nd controller, Madden, 99 Nights and Dragon Warriors 5 (I think).

Good times.  Now that I live further away from Sam's Town i'm kinda happy because it means that I don't spend so much time at their craps table pissing away money, but at the same time I really miss rolling the bones there.
Posted by grrouchie at 8:22 PM