Someday's I think to myself: "Self, I'd really love a new tattoo" and I end up finding shit like this. 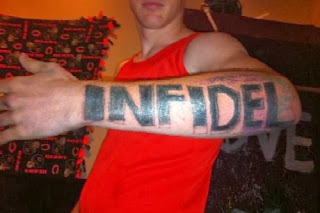 Thus far Halloween has been worthwhile.  I threw some pics on Facebook (for those of you who stalk me there) of myself and the kid and us together.  Last night we went to Springs Preserve and he was wearing his Deadpool outfit and we found a chick dressed up like Lady Deadpool.  This made me quite happy.  Thought about leaving my lady right then and there, but she'd miss me and the boy so I just kept my carnal thoughts to myself. 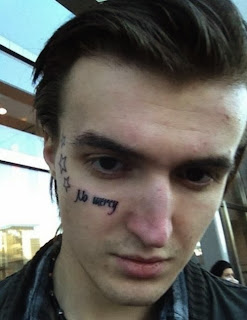 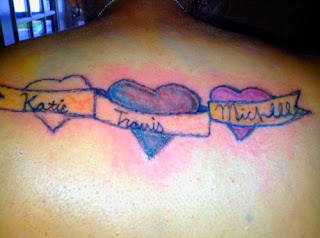 I've had my new computer for about a month now and the one thing that I am certain of is that I really dislike windows 8.  I hate the whole "lets just make everything apps" phase that computers are going through.  If I wanted a tablet I'd buy a tablet (and I own two of those already but am lusting after a 3rd, prettier one).  I don't like the way I have to switch between programs.  I don't like a lot of crap about windows 8 but I guess I just have to learn to deal with it and adapt.
Windows 8 does not suck nearly as bad as Millennium did so it's got that going for it. 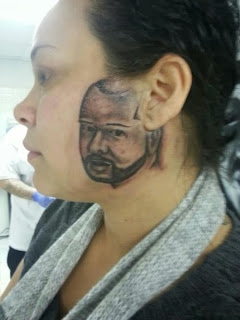 Because one person sent me like 6 requests and I asked him to justify his actions I ended up caving up.  Yes, I have downloaded and started playing Candy Crush Saga.  It's not a bad little time waster, and currently my favorite Poop Game of choice, but I don't get why everyone has been so gaga over it.  Me, well I have an addictive personality and when I start playing shit like that I just can't quit.  There is something wrong in my head that causes me to just keep going until I reach some sort of goal that I make up (but when I reach that goal I quit playing and never go back).  So, I'm obsessively playing the game in order to pass up a few co-workers who have been playing for months.  Shoot me now. 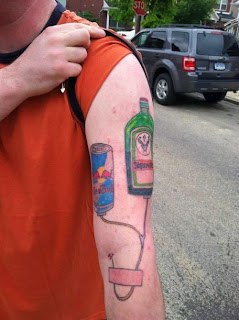 Tomorrow night I am taking my Fiance and heading to Fright Dome and am quite excited about it. I highly enjoyed the experience last year and am really looking forward to the new attractions this year.  This year they have one you go through by yourself and I have already been told that I am the only one doing that as she will just wait for me by the exit.  Whatevs.  I really do love Haunted Houses.  There is just something special and magical about people trying to scare the shit out of you. 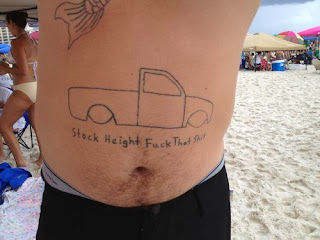 The McRib is back for a limited time and as is my usual routine I went out and bought two the day I found out about it.  I'll probably eat two more over the next week or two and then I'll be satiated until next year. 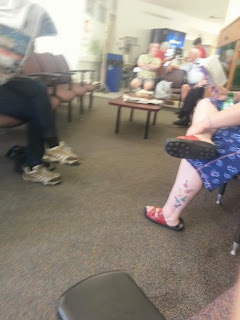 That chick has a lot of dicks climbing up her leg. 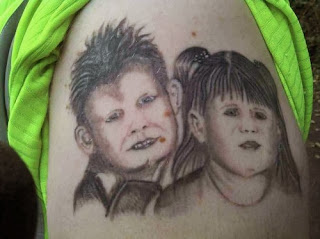 Speaking of obsessive, I didn't want to pick up Grand Theft Auto 5 until I worked my overnight.  Was talking to a co-worker about it and he went into great length about what he liked and stuff about the story and how great he thought it was in general.  This had me leaning towards "I hope they run a sale soon" and then I started looking things up which led me to the special edition that was released which led me to the fact that the Special Edition comes with a Steelbook packaging and I am retarded for Steelbooks.  So, now I have an amazon page open and waiting for me to just say "fuck it, I need it" and click the buy button. 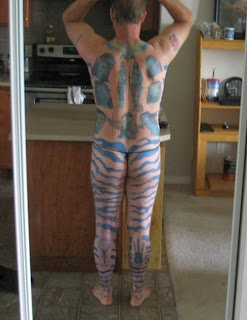 Of course if that happens then I also have about two other games that I really want and have in my "wishlist." So, what is holding me back is that I just don't want to spend the money.  The Playstation 4 and Xbox 1 are coming out next month and I'm trying to mentally figure out where I can scrape that money from and also to justify it in my head.  Right now I'm leaning towards "I need to buy these before moving in with my future wife because it's easier to justify spending a lot of money before we live together than to justify spending an ass-load of money after we are living together." 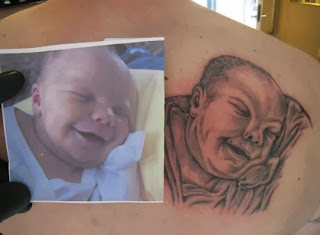 While on the gaming subject, the thing that really annoys me about all these next gen systems that are coming out is that there are no games that are must haves for me at launch.  Watch Dogs was as close as it got and that got pushed back to next year.  The Xbox has Dead Rising 3 but shit, I haven't bothered with the 1st two even though I've really wanted to. 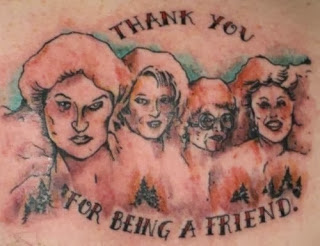 And this leads me to spring cleaning.  Recently I had my house painted (and soon am getting new carpet put in) and thus I had to pack up my shit into boxes and move it out of my room to make life easier for the painters.  I'm a pack-rat of epic proportions.  I keep a lot of shit.  I like shit evidently.  I have way too much of it and it generally only sinks in when I'm forced to pack it all up for one reason or another.  Mentally I've told myself that I'm going to get rid of a lot of it.  Sure, it's nice to have collections of Video Games and whatever else I have but the reality is that I'm getting older and there is no real reason for me to be hanging on to all of this stuff - especially if I'm never actually going to get around to using it.
So, it's going to be tough but I've really got to let some of it go.  I don't want to lug it all over to the new place after I get married because there won't be place to display it all and also there is a high probability that if it looks like a toy the package will mysteriously end up opened because the house has a mischievous child who wants to play with everything. 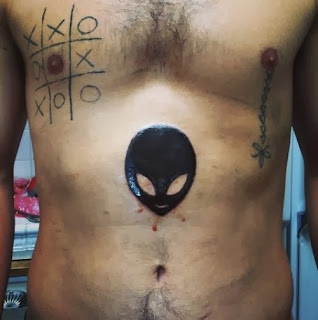 I could leave a lot of my stuff at my house and set up some displays in one of the extra bedrooms that will be used as a play room when I bring the family over to visit.  While I think this is a great short term solution it does not serve the long term which is that at some point I'm still going to have to pack all the shit up again.  Whether the house turns into a rental after my parents move on or if it gets sold or whatever, the stuff cannot just stay there permanently.  Also, if I have stuff I'm displaying I'll continue to have the urge to add more stuff to the mix because there are always collectors editions coming out and dammit I'm addicted to that shit. 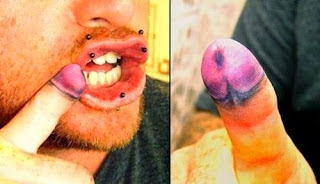 The picture above while completely retarded might be one of my favorite tattoo's ever, right up there with the stick figure mowing the lawn through the pubic hairs.  The shitty piercings have to go though. 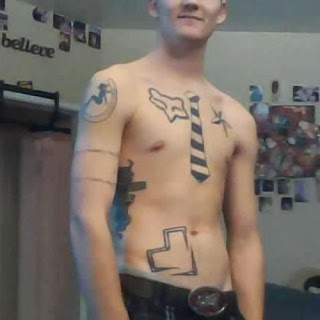 We are now going to be planning our conception (post wedding) around the Chinese Fertilization Calendar or whatever the fuck it is because she wants a girl.  Oh the joys of superstition.
She will also be in High Fertility during that time period - according to some application she has on her phone that tells her when her eggs are dropping and when I need to pull out earlier....
Modern technology