Man oh man have I been slacking off something fierce since I went on Vacation.  I knew it was going to be a difficult 4 days but when I came back home I didn't just jump back into my old routine, nope, I kept on going with my vacation bad habits.  Not walking extra steps, not eating healthy, NOT saying no to those donuts or chips or whatever else I happened to be craving.
Vacation really did a number on me.

With that in mind I'm really going to right this injustice and get back on track during the month of November.
Why do today what you can put off until tomorrow?

I'm going to try to get motivated to hit the gym today even for just a simple 3 mile walk on the elliptical or treadmill.  However, I am functioning off of less than 4 hours sleep and I'm quite certain that I'll just blow it off.
Tomorrow is Trick or Treating with the family and I just don't see myself making a trip to the gym after work but before the fun.
Friday is First Friday and probably the last I'll be able to go to for a while.  November is a 3 pay month and those months have that extra Friday in them and thus shifts the balance of power towards evil thus making me close every single First Friday until the next 3 pay month.  However, at least this happens during the winter months so that I am not forced to drink beer just to stay warm!!!

So, November it is.
As such I am looking through different fitness Facebook sites and crap my friends post to help find things to motivate me.
I'm also thinking about doing a weight loss challenge at work that will probably end up costing me $10 per week - but it's the motivation that is important.

So far this is what I'll be attempting in November. 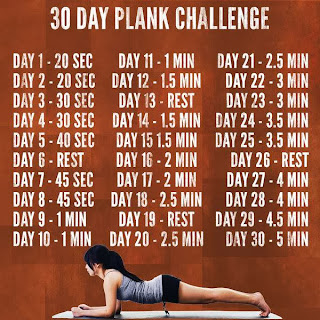 I fully expect to fail this somewhere during the month - but I will keep up with it daily and see what kind of progress I get anyways.  Day 9 looks like a hurdle currently but only because I don't think I've ever hit the minute mark before, of course I've never kept up with it so who knows.  Day 30 is probably impossible but that's why they call it a challenge right?
So, who wants to start taking wagers on what day I'll initially fail?

Now, for the weekly upates

Even though I've been slacking I'm happy that my daily average is still over 10k.  I'm going to work on getting my weekly number back to 90k and then get back into the habit of getting in those extra steps every single day.
Ideally I want to be hitting at least 40 miles per week and I need to get my weight back down.  My lowest was 213 and I'm up from that so I need to start focusing on getting the exercise in and the weight will take care of itself.

Video Game Update:
11h 24m were played this past week (per raptr).  All of it was Diablo 3.
Yesterday I got my Barbarian to Act 2 and now I will work on progressing my Monk and Demon Hunter to Act 2 as well.  I've now put over 50 hours into Diablo 3 and mostly because I've been toying around with different characters instead of just focusing on one and beating the game for the first time.
I want to pick up GTA V and am getting closer to pulling the trigger but I need to sell some other stuff off first to justify it.  Time Will Tell.

TV Update:
After finishing Breaking Bad I haven't bothered to start sinking my mind into another serious TV Series.  I'm nearing the end of The League Season 4 and then I have to decide what direction to go next.
My currently Choices.
The Walking Dead Season 3
Game of Thrones Season 2
Dexter Season 4

Comic Book Update:
I haven't read a single one in probably 6 weeks.  I've got quite the backlog.  When I slack, I slack at everything!

Posted by grrouchie at 4:11 PM