Last week was the annual CAC gathering and fun time.  Monday included a wrestling show, Tuesday was a Bologna Dinner with some awards and then Wednesday was the big fancy dinner and the big awards.

Cauliflower Alley Club this year was celebrating their 49th anniversary, next year they are trying to go big for 50.  I'm really curious to see what they can pull off as I've been enjoying it for the last 5 or so.

This years big awards were given to Michael PS Hayes of The Fabulous Freebirds fame, and Terry Taylor who is sadly best known as The Red Rooster.

Some of the usual people were in attendance which is one of the things that make events like this fun for me.  J.J. Dillon and Terry Funk were the MC's for the evening.  Jim Ross was there again as well.  Normally I harass these people for a picture but this year I didn't feel the need to do it -I'm pretty sure that I will once again next year.

Before I put my crappy pictures up (my phone's camera sucks especially through ZOOM which apparently means Zoom in and Unfocus) ....

There is a membership for CAC, you can choose to buy a Lifetime membership or you can pay yearly but the fact is that up to this point the membership really hasn't meant much in terms of the actual club.  The money is partially donated so you are helping out a charity (and claiming a tax deduction if you itemize).  This year I had decided I wanted to get the lifetime membership and 5 or so years down the line if my son is still huge into wrestling then I'd get him one as well.
Lifetime membership is $300 this year and because of a hot craps run I was armed with the money.  I went up to the President and asked him what I needed to do and he said I had to wait for some lady to come back as she takes care of that stuff. When she got back she told me that they were either out of or they just couldn't find their membership papers and they told me that I needed to fill out the forms and submit my payment online.
Here I am with $300 in hand trying to give my money to them and they are basically telling me that they didn't print out enough forms on cheap paper before the event started and I was unable to give them my money.

So, here I sit a week later still not having become a lifetime member.  I was in the "hear and now" and I wanted to do it but telling me to go home and do it online took away the desire.  Now I do realize that there is speculation that the membership prices are going up next year and you will, in fact, have to have the membership to be privy to buying the dinner packages to the awards banquet and whatnot.  But I lost my motivation.  Maybe if I still have the money after this years ComicCon I'll pony it up.  If not I'll just stick with the yearly membership and deal with the price increase. 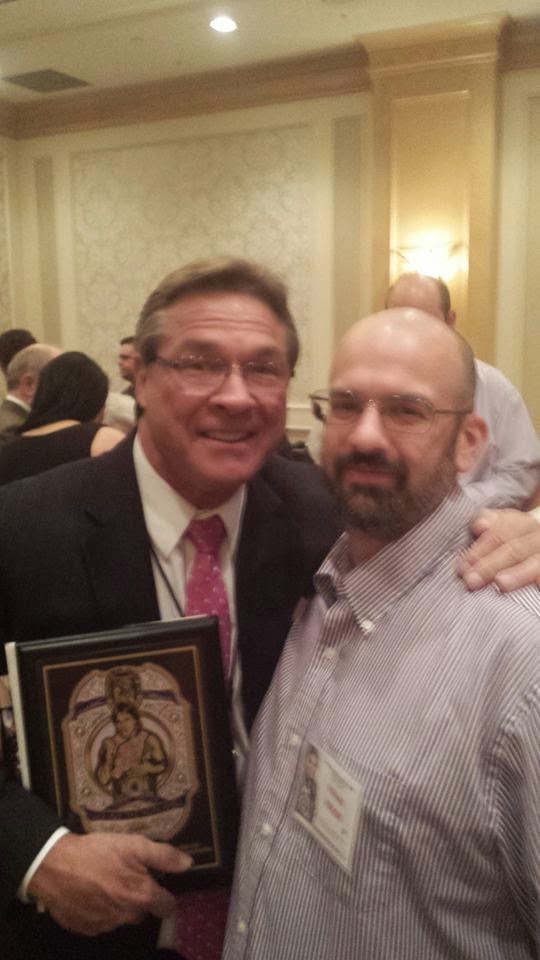 Terry Taylor.  This is one of the big reasons I keep coming to these shows.  Over the years I have gotten to meet some of my favorite wrestlers that I grew up idolizing.  Terry Taylor, Brett Heart, Stone Cold Steve Austin, Mic Foley, Jim Ross, Terry Funk, etc.  Every year I at last run into someone new that I haven't gotten to briefly meet and sometimes I get to snap a picture to remember it. 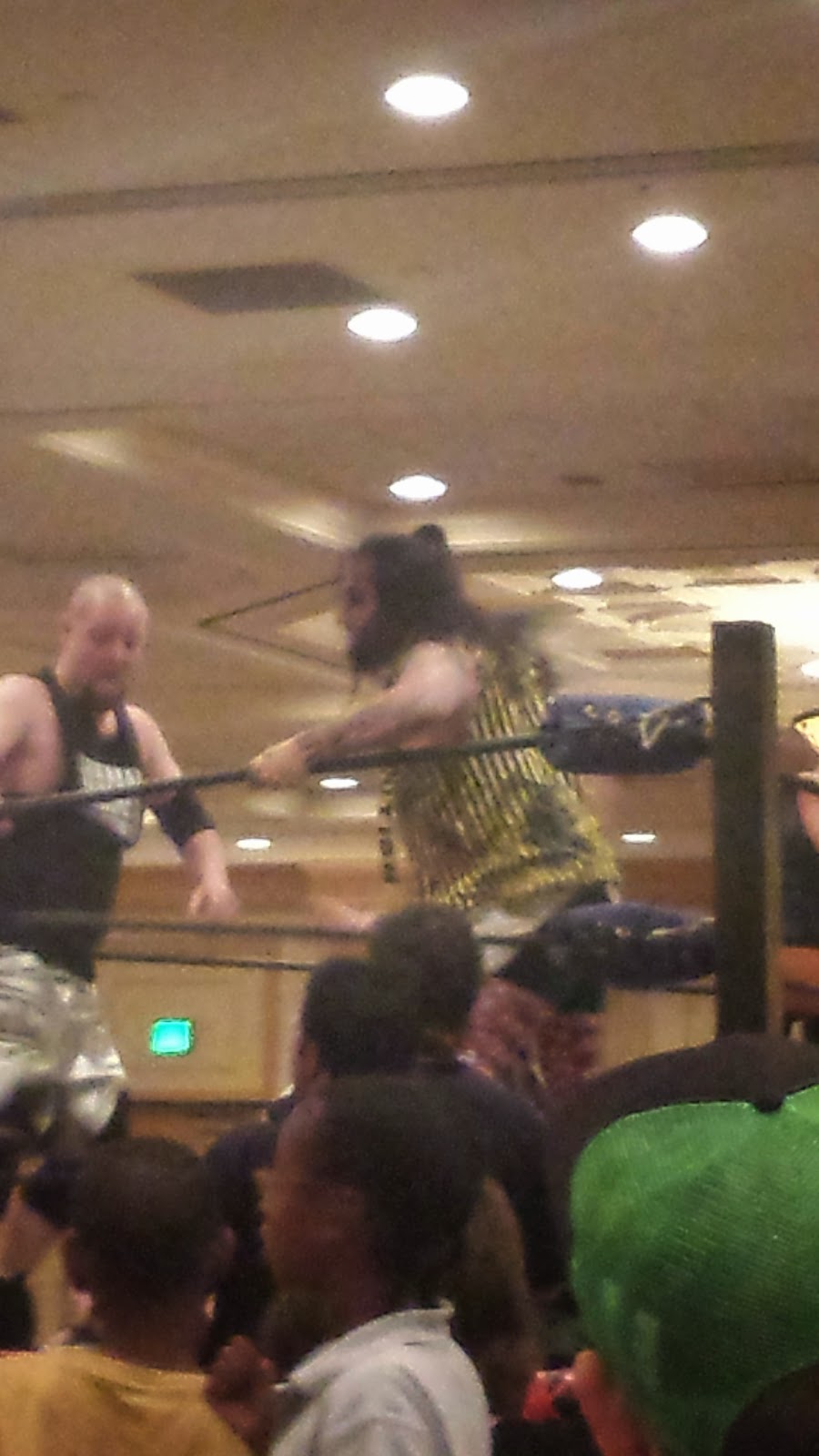 This is Sinn Bodhi who briefly wrestled in the WWE as KarNizy.  I honestly really enjoy watching him and talking to him.  This year he had a booth set up and I got a shirt and a poster off of him with an autograph on the poster.  He also had a lot of custom wrestling figures up for sale that will be hitting Ebay soon.  The only one I really wanted sold before I even made it to the event and that was a Bray Wyatt.

Sinn also happens to work at a Tattoo Shop here in Las Vegas and I'm pretty certain that my next work is going to be done by him now. I probably won't be getting the elaborate piece that I wanted on my calf but instead I'll have him do something small on my "reserved for cartoons, comics and video games, section of my arm" 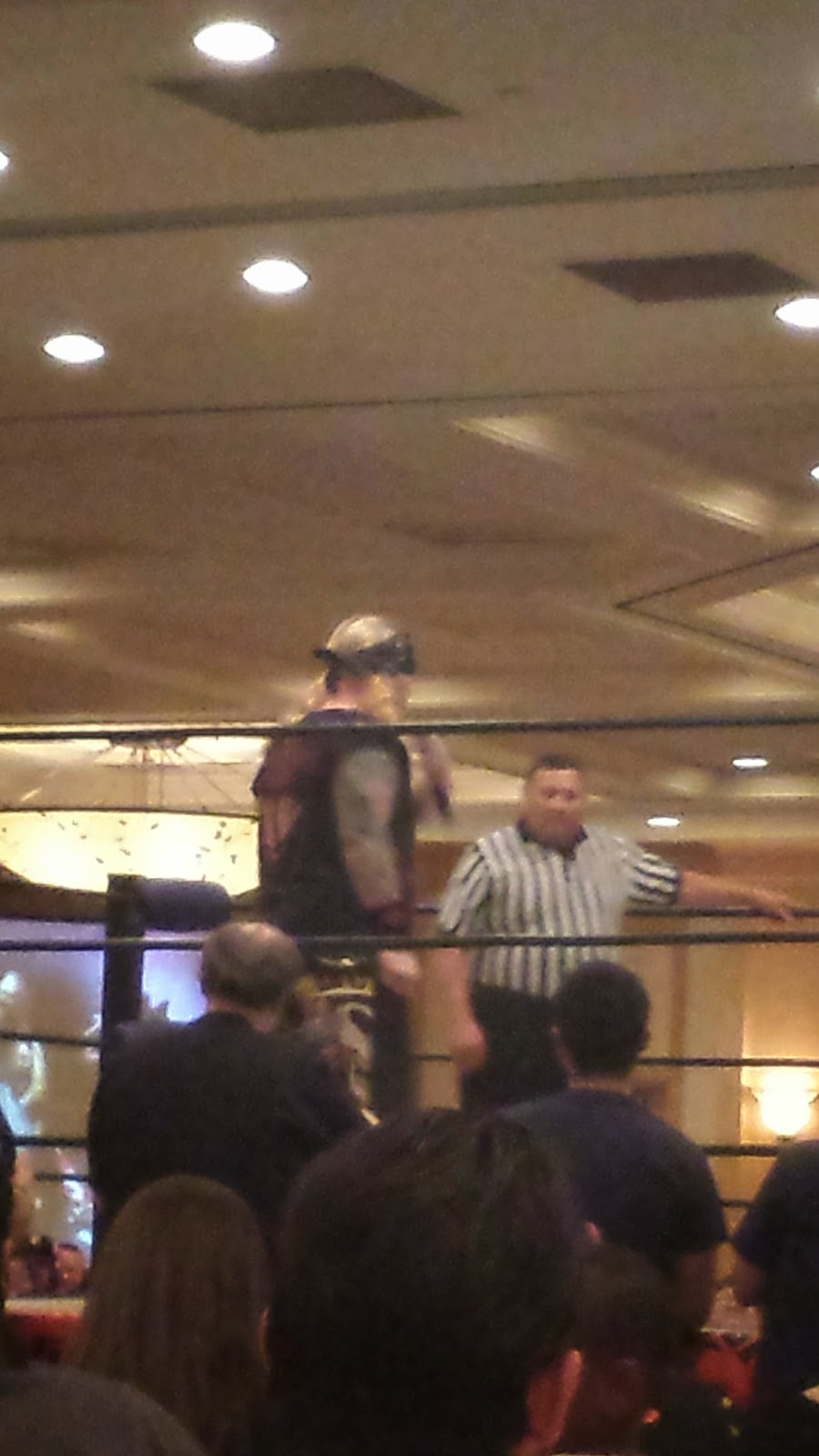 That's Buddy Love, or something like that.  Pretty much looks like a mini Gangrel from a distance but he wears some swwweeeetttt Guns n Roses tights.  Also, when introduced they said  "And standing tall at 9...um... and a half inches...."

He received an award on the 2nd night because he actually forked out a few thousand dollars of his own money to pay for the insurance to have the wrestling show put on.  That I thought was a great gesture especially coming from an independent wrestler. 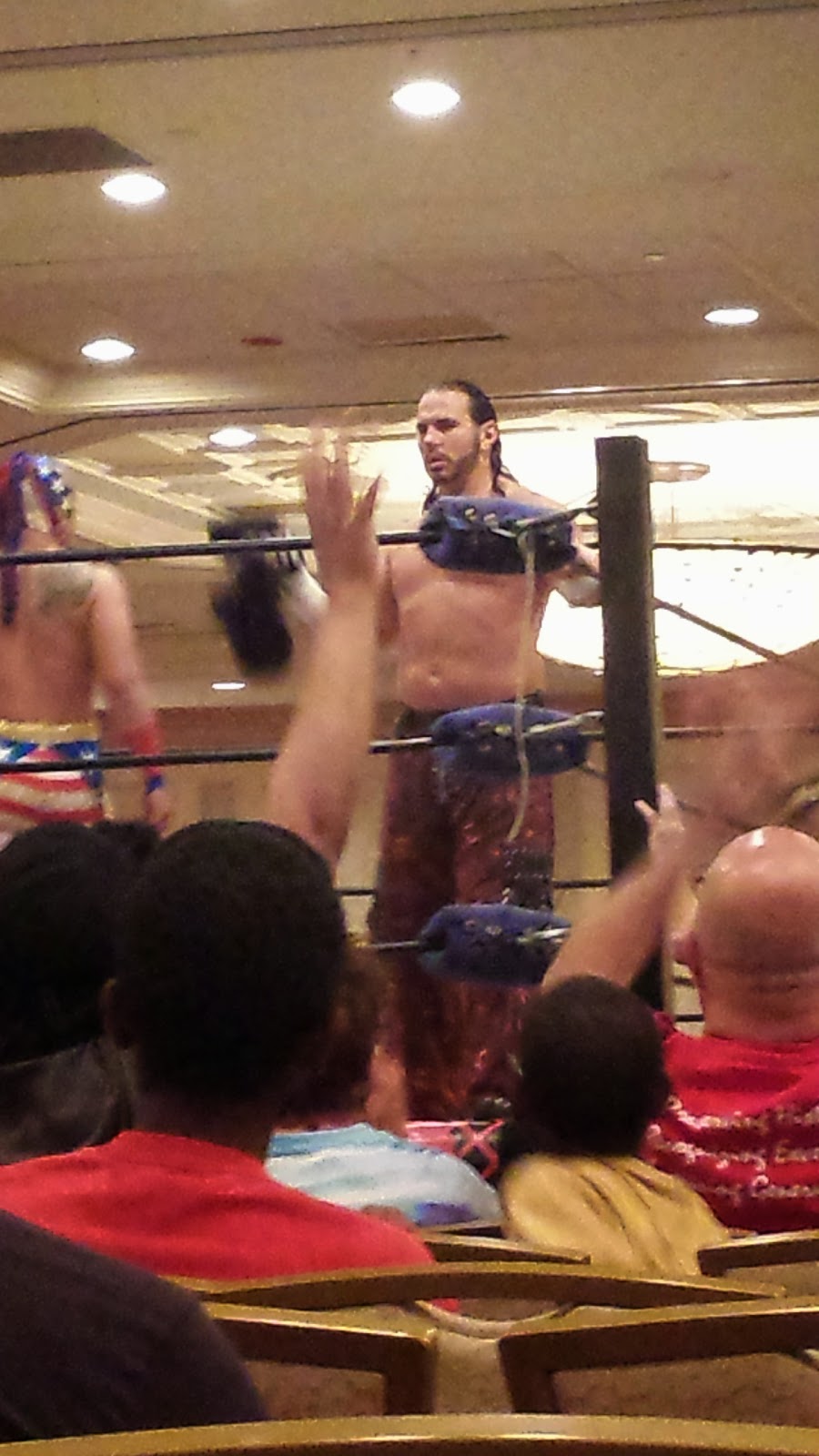 This here be Matt Hardy, the only "big" name to appear for the wrestling matches.  I guess he does a lot of indy work now and appears in FSW from time to time (FSW is a local Vegas Wrestling Federation).