Today I decided to be a nice guy and offer to help out one of my associates with loading some product for these two ladies.  One of them was probably the mother and the other the daughter that I placed to be somewhere around the 18 year old range.

During our help I heard talk about her father and say that he was old at 40 and that he got offended that she thought he was forty because he really is only 38 and all I could think was "fuck, I'm the same age as this guy and I'm oggling his daughter right now."

During the load we had two heavy muscle racks to load into the back of their soccer mom van.  While we were doing this the daughter decided that it would be a great time to strap two younger children into their child seats in the back of the van.

She did this by climbing fully into the van and standing up/bending over where I got way more of a view down her shirt than I was expecting.

I'm quite sure she was doing it on purpose. I am, after-all, a pretty sexy beast.
It's the gray hairs and the bulbous nose. 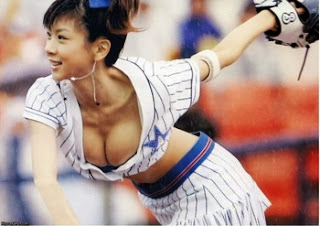 This is pretty much what I was looking at minus the baseball glove and weird headset.
It wasn't until after this that I overheard the conversation about her "old" father that I pieced together that she was probably about 16 or so and really started to feel like a dirty old man.

My other customer interaction occurred the day before when I was talking with two or three other guys near the hardware desk.
The one guy was talking about how poor he was and that he was going to have to turn to stripping to make a living.  I interjected that I would make a great stripper.
He looked at me and said "I know you've been losing weight and all but I don't think you are quite stripper material yet."
I responded "So, yer saying that chicks aren't into stretch marks?"

Just as I was saying that this lady customer came walking up the aisle and as she heard what I had to say she had a huge grin on her face.  I pointed it out and said "see, even she laughs at me" and as she walked by us she made sure to say (loud enough for us to hear) "Nope, No we sure don't like stretch marks" and everyone had a big laugh at my expense.