2013 ended up being a great year for myself but 2014 is poised to be the best one ever.
Last year I proposed to the love of my life and in just 113 days we will be married and a few days after that we will be in beautiful Hawaii.

The beginning of every year is full of people making lists of things that they want to do to better themselves and then a few days later most of those lists are forgotten and ignored.

So, it's time for my annual New Years REVOLUTIONS (and I'm kind of annoyed this terminology was stolen by a crappy commercial). 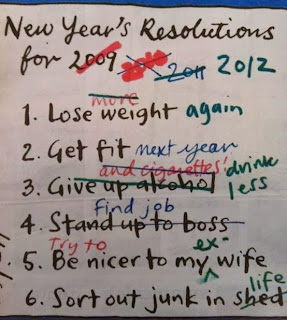 1 - Continue to lose weight and get into shape for my wedding photos and walks across the beach nearly naked in Hawaii.   I really want to look good in my photos for my fiance so that she can look back on them fondly and realize what a catch I was "back then."  Come March will mark 2 years that I have been on my "get healthier" quest and at that point I should be down One Third of what my weight was at the time.  That is pretty f'n impressive and the fact that I have done everything in a slow controlled manner to ensure that I do not put the weight back on is the greatest part of all.

2 - Play more Video Games.  No specific goal but here at the end of the year I have found myself putting some serious hours into some games that I really love and I want to continue because this is one of my favorite past times.  I've broken the 100 hour mark in Diablo 3 and I plan on breaking that mark in Skyrim as well.

3 - Beat a video game for every system I own.  This one gets to be more challenging as I keep adding new systems to my collection.  I'll also want to make a separate post about this one in particular at a later date so that I can detail what systems I am including in this and what games in particular I am looking to play and beat on each of those systems.  Now that the PS4 and Xbox One are out (and the fact that I want to pick up a PS Vita) it becomes a more daunting task but one that I feel I am up for.  The only problem is finding time to actually get some gaming in especially when I no longer have "free time" and am living with my new family.  It will be tricky but I'm sure I'll find something that works.

4 - Become a Crock-Pot Master.  I'm not sure how this popped into my head or why it has stayed there but for some weird reason I want to learn to make some good tasty stuff via the crock-pot once I am living with my new family.  I've never been much of a cook and I'm a big fan of making something quick and easy when my belly tells my brain that it's hungry.  So, this is going to take patience and dedication to plan ahead and actually prepare things.  The crock-pot is a nice way to do it too because you just throw the ingredients in and set the heat and timer and just let it go until it's ready.  Not a whole lot of tending to the garden if you know what I mean.

5 - Be an amazing father and help further the development of the son I am marrying into.

6 - Figure out ways to spend less money - Budget - etc.  The wedding is going to take a while to pay off but it's all going to be worth it in the long run.  After that there is saving up for college and retirement and other big scary things that life throws at you.

7 - Read at least one book every 3 months.  I want to say one book per month but I know me and I know that it just is not going to happen.  I could read like 8 books in the first 3 months and then next thing you know I just ignore books for the rest of the year.  This is what happened either this year or last year.  However, having received Doctor Sleep for Xmas I really want to dig into it.  I also want to read the last Dark Tower book that came out, The Wind Through the Keyhole.

10 - Make more time for quiet self reflection so that life doesn't overwhelm me and I ignore the little things.
Posted by grrouchie at 10:08 PM