So my new focus, eating habits and attempts to get to the gym have all started having the positive effect that I was hoping they would.  From a peak of 241 during my "do whatever the hell I want phase" I am now down to 233 which is the lowest I reached before I hit my plateau.  I'm hoping that I'll be down to 230 here pretty soon and then moving on to new and uncharted territory.

I know we are only 4 days into June but thus far I have been tracking everything I eat to make sure that I do not go over my calorie goal (though one day I went over by 35 or so) and I have even gone so far as to plan ahead and see how many calories the things I want to eat would take up to make sure I can fit it into my "budget."

After a week I'm going to give myself a cheat day but the word cheat is being used a bit differently than it is normally associated with diet and exercise.  For me it's just a day where I eat something that I've been craving while at the same time maintaining my calorie count for the day.

What I'm really craving right now is a Bobbie.  For those of you who don't know, a sub shop named Capriotti's makes this sandwich, The Bobbie, which is Thanksgiving dinner on a bun.  Turkey, mayo, stuffing, cranberry, amazingly delicious.  However, deliciousness comes at a price and that price is the number 992.
Nine Hundred Ninety Two calories for the small sub (the small is 9 inches).

On paper I've already worked out my meals on paper so that I can fit this bad boy into my schedule.  It would be a very light eating day other than that but I'm also planning on hitting the gym early in the day so that I can give myself an extra 400-500 calories to play with just in case I get the hankering for anything else.

Today I hit the gym for the 2nd day in a row. Worked the elliptical again and instead of trying to see how quickly I could log my miles I decided that I wanted to up the tension to give myself a better workout.
Every minute I increased the difficulty by 1 until I got to 15.  Then I would decrease it by 1 every 2 minutes and by the time I got down to level 10 again it's time for my 5 minute cool down. 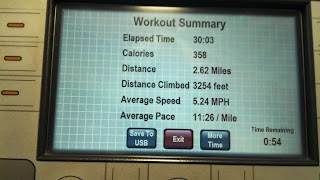 Next time I'm going to start at level 5 and work my way up and try to go down a level ever 3 minutes instead.

Now we'll just have to see how badly it all goes to hell when the Disney trip rolls around next Wednesday heh!