Ahh, it's Saturday once again.
Well, actually it's Friday night just a little before midnight and I'm chowing down on a Blue Moon and trying to resist the urge to hit the fridge for a 2nd (and 3rd) one with some snacks because I really didn't leave myself enough calories to pig out like I'd really like to at this moment.
So, I had enough for one Blue Moon and that is what I'm sticking too.

Other than during my vacation (and that break was planned) I've been doing really good at tracking my daily caloric intake with MyFitnessPal.  I'm finding it to be a very useful tool and I think it's helping me a good deal.

Before I went to Disney on Vacation I was hovering near the 228 mark.  Five days later I made it back and actually did pretty good at limiting my overindulgence of all things bad for me and had only gained 3 pounds putting me at 231.

Right now I am at 226 and I'm feeling good about life.

It's weird to think that my first goal was to get down to 220 and I thought that I'd feel very comfortable at that weight and just stop there.  However as time has gone on and I've gotten closer and closer to this initial goal I have begun to realize that I'm still pretty much a big fat ass and I have a lot of room for improvement still.

In fact, it was when I saw pictures of me, during vacation, topless on the beach that it truly hit me how much more work I still have left to do and how much weight I still have room to drop.

At one point I had, in jest, stated that I want to get down to 180 for my wedding next April.  Looking at my fat-ass right now I think 180 is actually a pretty reasonable goal.  However, I'm going to just say my next goal is 200 pounds and then see where I go from there.  200 is still 26 pounds away.

Before my Vacation I went to Walmart and bought some new shorts as my old ones, size 46, were too baggy.  So, I picked out the ones I wanted and grabbed two sizes - 42 and 40.
I figure'd the 40 wouldn't fit but I wanted to try them anyways in hopes that I'd be getting close to them.

So, they were the first ones I put on and I was pretty surprised to find that they fit well and I needed a belt (they came with a free belt) to keep them on comfortably.  Dropping from a 46 to a 40 is huge and i'm pretty excited about it.

The last time I was under 230 and wearing a 40 was sometime during college - over a decade ago.
It's my goal to get back near High-School weight and pant size.  So this is why 180 pounds and 36 waist are my Final targets.
I've always been a bit bigger and going anywhere lower than that I think is just plain ridiculous for me, but I think that those long term goals are achievable and maintainable.  Only time will tell but for now 200 and 38 are what I have my sights set on.

Using MyFitnessPal I'm currently being told that in 5 weeks (near the end of July) if I keep eating how I am I will be hovering around 216 pounds.  I'm beginning to track where it thinks I'll be every day so that once 5 weeks rolls around I can see how close or how far off I am and then from there I can track every couple of days to see how accurate the "predictions" are.

So, fatty grrouchie pics -
While I still can't stand the way I look - I admit I feel a TON better about myself.  Last year at this time I never would have been topless on a beach, I would not have had the confidence to do it.  However, this year it didn't bother me until I saw the pictures that my Fiance took.

Previously I showed a pic of me dressed up for my buddies wedding and I put the caption of "I'm the two guys on the left."  I'm no longer "two guys" but more like 1 guy and an 8 year old. 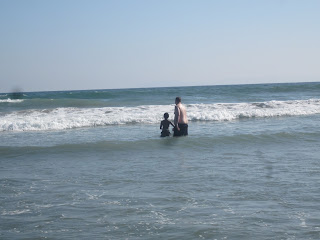 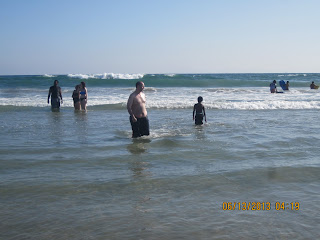 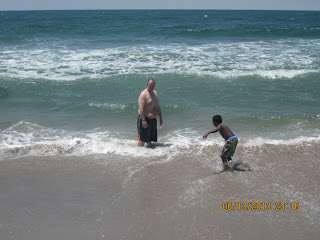 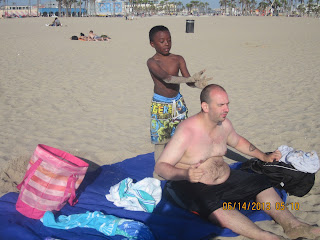