I've played a few times lately but I haven't written about it.  Life has me on a frantic pace and I just don't allow myself any me time other than when I'm putting my head on a pillow and trying to get some shut eye.
Case in point, right now I should be doing exactly that because I have to be to work by 6 am and I'm bloody tired because I stayed up too late last night drinking and eating poorly.....er.... I digress and am getting off track and ahead of myself.

It all started last week when I found myself bored and having to run some errands.  I finished my errands and then spaced out on the drive home and magically found myself pulling into and parking at Bally's Parking Lot.  Sometimes shit like that happens.  One moment you're at a Bank of America in North Las Vegas and then you black out and end up at Bally's.  It's like the good old times when Sam Kinison used to perform there regularly and everyone was fucked up on coke and hookers and trying to party like Motley Crue and not die in the process.

So what I did was borrowed $200 from my life-roll (technically I borrowed $500 just in case I had to re-buy but that situation never forced itself upon me) and started playing a game that I used to love and cherish and actually make some extra scratch at.  Basically I wanted to perform a warm up session before sitting down with Pete P Peters a couple of days later so that I didn't look like a complete donk idiot who only plays penny play money games online and make a horrible fool of myself.  What had actually happened was that I played slow and steady and ended up cashing out a nice little profit for the day without really hitting any big hands or getting myself into any big trouble.   Oh, cashing out with a profit?  Well that's pretty damned weird but I kinda remember what it feels like and I'll be damned if I don't like it.

During this time I got to catch up with some people from my favorite staff and that made life even that much better.  Ron B dealt to me and we had a good conversation going and he also pushed me a couple of my pots to get my stack building going.
A couple of dealers later a face from the past who used to deal at MGM when I started playing there came to my table and remembered me and, again, we had a great conversation.
During the time I was there multiple staff pointed out that I had lost a good amount of weight (ego boost) and this became a recurring theme over my poker sessions this past week.
Ron B now greets me with "hey Skinny" which - while I know I'm not skinny yet - makes me realize that this past year of trying to get healthier is all for a reason and I am getting there!

Fast forward to a couple of days later and Saturday is upon me.  The day I'm catching up with PPP.  I ended up making plans for earlier in the day to see Pacific Rim and was pleasantly surprised with how good and how much fun it was.  I propose that when this movie comes out a group of us get together, each with their own bottle of Jager and we drink every time someone in the movie says Jager.  This will be a lot of fun and the last one breathing wins.

After the movie was over I assumed that Triple P would still be soaking up the sun and the brews at the pool and I decided to check out the Red Rock poker room for a bit.  Normally I don't like playing there because it's local infested but I was there and that's a good enough excuse for me.  I was up and down a bit, mostly focused on the down side when this particular hand came up. 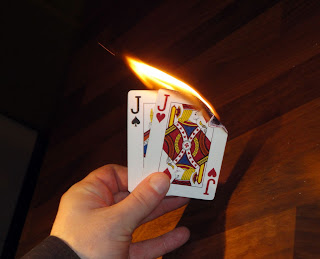 I'm in late position with Pocket Jacks.
There is a limper in early position and then a fold or two.  The Villain in middle position limps and the next guy raises to $12.  I see my Jacks and know that the session has not been too kind to me so I just call.  2 other people call and it gets back to the MP Limper Villain who decides to raise it to $45.
I immediately think this guy is just making a move to try to pick up the dead money in the middle.
Folds to me and being that this is a local joint infested with typical nits and that he limped in MP and that he limped after one other person limped already I just can't put him on AA or KK for the typical limp/re-raise trick.  Maybe a hand like AK or a small/mid pocket pair at best.
With this information in my head I push.  It folds to him and he calls without hesitation and turns up his KK.
I told him that I thought he was just making a move.
Flop comes out 9TQ giving me an open ended draw and also a back-door flush possibility.  I cannot hit my set though as he would straight.
Turn is a King giving him a set and me a straight and the river blanks for me to double up.
I end up winning another hand after that (this was all during my last orbit before I planned on leaving to go visit my fiance which was another reason I was so willing to shove my Jacks in that spot - I was leaving anyways).  I went from down $91 entering my last orbit to up $121 as I cashed out.
I'll take luck over skill any day of the week (so long as it favors me).

I head down for a couple hours with the love of my life and learn that PPP's session at the MGM went from bad to profitable.  He tells me he is drinking his way down the strip and we agree to meet up at Ballys.

As I walked to the podium at Bally's I was greeted by Pete who probably just noticed that I was the most handsome guy in the joint and assumed it was me.  I get the impression that he heard a bunch of attractive ladies talking about me and my prowess....or how I'm willing to pay for what I receive.... or he did that to like 12 other guys and finally got it right when I finally walked by.  Whatever, the point is that we greeted and chatted a bit before playing and then got seated at a brand new table opening up.
Again, I was complimented on the amount of weight I had lost by the dealer who showed us to our new table (and later by a floor who joined the game and was in a big hand with triPPPle which you can read about HERE).

We both stumbled out of the gate a little bit but found situations where we could make money and both, at one point, had doubled up.
Then - the grrouch hit.  By that I mean I got myself into a situation where I went from +$200 to down a little in the span of two hands in a fashion that I like to refer to as retarded.  It just seems to happen to me a lot over the last couple of years and I haven't handled it well for the most part.
Yes, I am willing to admit that I am to blame for the longest downswing I hope I ever go through - I had a nice conversation with Pete about this at one point.
Anyways - back to it.
I make a raise and a shorty pushes all in for $45 on top of what my raise was.  I figure he has me beat and I should just fold my hand and move on, but I already have that $15 in the pot and I'd really like to stack him so I call.  I do not catch up and I double him up.
The very next hand he raises small and I call and flop a flush.  I try to play tricky and just bet out into him, which he raises and then I push which he calls quicker than I'd like.
I say "Sorry, I caught the flush" and turn my hand over and then he says "So did I" and turns over the 2nd nuts which was about 12 hand ranks above mine.  Lesson learned.
For quite a while I make fun of the kid and tell him that he must own my soul and I refuse to play any pots against him ever again.
However, as the evening rolls along I end up in a few spots and take some pots from him to gain some of it back (but most was given away elsewhere).  Finally I hit a couple of big hands (A straight on a scary board and a Set on another scary board) and end up getting most of my profit back.
Oddly enough, at least while I was there, the biggest hand I played and won was against the Bally's floor guy who was playing while his wife was hitting up the tourney and the biggest hand PPP won was against the same guy.
No one ever said Floor could play well :)
(If you read this, I say everything in jest and spent $20 on a lap dance in your honor).

Once again I cash out decent and by the time PPP calls it quits he has a $750 stack.
He never actually says that he had a profit on the evening, just that he built his stack to $750.....
Things that make you go hmmmm


Sunday I wanted to write up a small trip report and ended up putting a little bit on AVP  but ended up at Bally's again.
I played a hand badly early to lose some chips.  Then I lost more when a guy played his QQ overpair weirdly and then I lost even more when a guy played his AA horribly but still managed to take my chips.  So, early on I was down $140 and I just decided to play tight and look for spots to build it back up.
I kept getting to $100-120 and then got QQ and multiple callers (How come I can raise once an hour but get 5 callers?) and the flop comes out AKx with 2 of a suit and action bets and calls before it gets back to me?  This happens 2 or 3 times (all with QQ) and keeps me from gaining momentum.
Finally as I'm nearing the end and about to call the session to an end as a loss I hit a set to get some chips and won a couple of other random hands.
I cashed out victorious for a small profit of $25 (I'll take it) but that was my 4th winning session in a row and it feels bloody good to do it.

Mentally (but not physically) I have taken the $200 out of my poker-roll and put it back into my life-roll (I just need to hit up the bank tomorrow and make that deposit) and I now have a pretty damned tiny poker-roll which I hope I can build by having a couple of more winning sessions before variance catches up with me and forces me to have a losing one.
My poker-roll sits at approx $527 right now and I'm cool with that.
Life is good.
Poker is good.

postscript - it appears as though I also played with AVPer Spitball during one of my sessions though he did not know I was AVP and I (as usual) was clueless.  Hopefully next time he will introduce himself!