Since my last poker report I have played twice. 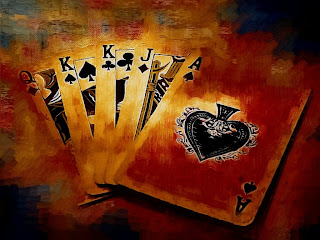 The first trip was one of those where I over played a hand while running into a monster to lose more than I should have and the rest of the night consisted of me either folding pre-flop or folding on the flop.
My percentage of turns and rivers seen was under 5% I'd say because my starting hand selection sucked and when I did see a flop I missed everything and there was action back to me.
Whatever, sessions like that happen.
End result, I lost $178.
This brought my Sock-Roll down to $277 - under 2 buy-ins.

Last nights session originated because I wasn't tired when I got out of work at 10:30 pm.  So, I decided to drive down and hit up a game.  I nearly stopped at the Santa Fe Station because it is the first casino I pass on my way towards the strip but I decided that playing on a Tuesday night in a room with only 1 1-2 No Limit game running with local nits was probably not the best idea.
My mind was not made up where I would end up because I was thinking about Bally's again (but those back to back losing sessions was plaguing my head a bit) or maybe The Mirage or Planet Hollywood.  There is just something about Bally's that I really like that keeps pulling me back in, mostly it's the dealers.
I still hate the new location of the room and I miss the old location. This sentiment was also reflected by a few others at the table last night.
Whatever, you deal with it and play cards or you go to another room.  I like Bally's and as such this is where I end up most of the time when I go out. 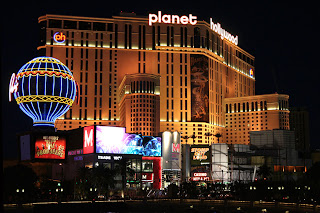 While at the table a conversation was brought up over whether or not people thought that Planet Hollywood was involved in any cheating.

Back in 2009 Planet Hollywood was in the news because some of the supervisors were fixing high hand jackpots just to get a little extra scratch in their pockets.  Because that tarnish exists in peoples minds it is a bit hard to shake the idea that they could be up to their old tricks again (even though the entire floor has changed since those past incidents).  For those not aware of what I am referring to, Caesars Entertainment this year established a Bad Beat Jackpot for all of their Las Vegas rooms (which got rid of High Hands) and it has been hit 3 times so far.  Every single time it was hit at Planet Hollywood.  Some people don't like how the percentages work out for something like this to occur at the same room every single time.  I, however, am of the opinion that it's just a fluke.  Lets see if they can take the 4th one as well or if that goes to another room.
Fact of the matter is, when dealing with sums of money this large there is going to be a lot of scrutiny every single time that the BBJ is hit.  When one room hits multiple in a row I feel certain that they look into it and go over all the camera angles to make sure that there was no foul play involved.
In all of my time playing poker I have only ever seen one hand that would even qualify for a BBJ - this adds nothing to the discussion, I just wanted to make that statement.

A floor person last night pointed out that Planet Hollywood has games that are more akin to people hitting jackpots and that is why, he reasons, that they have hit the first three.  Players over there are more aggro and play a lot more loosely and as such you'll have more people all in early on draws that could possibly hit.  He does make a very good point because the games in that room are very swingy at times and I have noticed a high amount of variance when I put time into the room.  I could easily see people getting all their money in with a set vs a straight flush draw based on the aggro nature of the room.
I'm just hoping that the next time it hits I happen to be sitting at Bally's getting my players share (which is currently over $4,000).
Of course, I'd love to be the "loser" who nets over $100k or the winner taking in a measly $50k as well, but I'm perfectly content with just taking the players share and calling it a day. 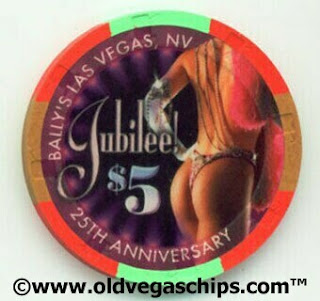 My time at the table started with an amazing run of cards.  By that I mean that my cards were mostly crap, every hand was raised pre-flop before me and I folded every single time like I have been trained to do instead of playing like a Fish which I call myself anyways.
In my 1st 4 hands I would have tripled up my starting stack (at the minimum) if I were to have seen those 4 flops.  I would have hit 2 pair against two Top Pairs who duke'd it out for a good sized pot.  I would have turned a flush which would have brought home even greater rewards.  I would have had trips and I believe another 2 pair.  Every pot was contested and they were all somewhere in the range of $100-$200 by the time showdown hit.   Oh, I was drooling to hit a hand so that I could get paid off.

The table was pretty interesting because while there was money flying around there were definitely thinking players sitting.  There were well timed raises and a lot of the pots were played above the fish mentality.
With this in mind I got involved in less pots and I picked my spots wisely.  I also tried to play into the thinking players hands to get them to commit chips trying to steal pots on scary boards.  For the most part this worked, but there was an instance or two where they caught up or were ahead anyways.  But, those pots were smaller than the times that I won.

While this was a very successful night for myself there were some hands where I struggled to know what the right play was or if I should have thrown in a value bet instead of checking the river.
While I thought I was good I wasn't happy with the fact that I could have faced a raise from some of these guys that would make me have to consider laying down my holdings.  Also, playing on a limited Sock-Roll plays into me taking the safe way out as well.

For instance, last real hand of the evening for me.  I have TJspades and am in late position.
I limp and we take the flop 4 handed.

The turn is the 9 of spades giving me the current nuts but there are Re-draws.  Villain A checks and Villain B bets out $20 which is quickly called by Villain C.
It's my turn to act and a quick count of the pot gives me around $80 (minus rake) so after a little deliberation I make it $75 to go. Basically I just counted the red chips and bet the amount I came up with....  It felt like the right amount at the time.
Villain A folds, Villain B thinks about it for about a minute and then decides to fold after counting out the call.
Villain C looks like he wants to fold but after some deliberation makes the call.

The river comes a black 3, pairing the board. After a little thought Villain C checks it to me.  I hate the board paring and I know that he is capable of putting in a check raise here if he thinks I'm weak.
So, I puss out and check it as well.
Can some of the better players out there give me any advice on this hand?  Was checking the right play because we were both so deep?  Should I have still thrown out a value bet?  $50? Another $75?

There were a couple of other instances where I hit a good hand but the board kept getting uglier as it went on so I kept playing to keep the pot small(er) instead of risking getting bluffed off my hand or having to make a really tough decision.

When all was said and done I really only won a couple of big pots for most of my profit (A set vs TP Nut Flush Draw and 2 pair vs Top Pair plus this straight) and other than that it was winning and losing a few little pots here and there.

After 5 hours I was having trouble keeping my eyes open and headed home for a nap. 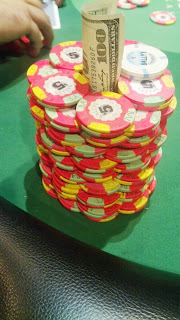 Posted by grrouchie at 2:14 PM