Does that Include Kids?

Last night could have went one of a million different ways.  It all started because I had the weekend off and Saturdays generally lead to mass boredom.  The problem exists that if I don't work on Saturday I generally do not have anything to do.
So, as the day wore on and my fantasy draft came to a crashing halt and because I do not have DirecTv currently there was no pre-season games on TV I decided to just go do something.
A few phone calls later and it appears as though I'm going it alone.

Decided to give Naked City Pizza a try since I have heard good things about it from multiple people. It's also been featured on Diners, Drives and Dumpsters or something which is always a good thing.  The one here in Vegas is inside of a bar called Moon Doggies (I think) and it's down on Arville and Desert Inn.

Going there ended up being quite the wise choice.
At first I was greeted with the typical bar scene, and this one was a bit on the narrow side with a Jukebox in the middle.  Constantly going to the Jukebox was quite an attractive piece of white trash with great legs and an ass that could kill. 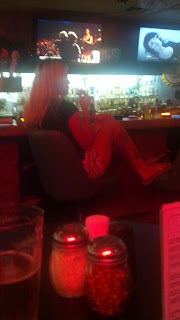 Unfortunately the bar was dark and turning on my flash to get a better photo would have probably been considered rude, so the best I have is this.  The bartender was no slouch in the looks department either but alas I did not snap a photo of her because within 10 minutes of me getting to the ...... Oh, lets go back a step.

Upon arrival, other than noticing the leggy blonde with the nice ass, I made my way to the bar for a beer to relax to and enjoy the scenery, take everything in before deciding what to order.  I was just about to go for my standard drink when I noticed that they had Labatt Blue on tap.
Blue, for those of you who don't know, is a Canadian beer that is more widely available on the east coast and pretty much a rare find out here in Vegas.  Of course, being one of the only two beers I really drank in PA, it would have to be hard to find out here.  Normally I partook of the "light" variate but beggars cannot be choosers.  So the beer wench strolls over to me and I promptly order a Blue and of course tweet about it.
One of the friends in my Strat league retorts that he would have held out for a Yuengling. I'm pretty sure he was just rubbing my nose in the fact that Yuengling is awesome and great tasting and west of the Mississippi it's pretty much just a Myth.  Oh how I could go for a six pack or 3 :)

So, sitting down with my beer and observing everything about the blonde, life gets interrupted by a guy asking to find his way to the bathroom.  He gets pointed in the right direction and made fun of a little bit but off he goes.  Less than 10 minutes later one of the staff from the Pizza joint says that he is passed out on the floor and proceeds to enlist another person to help him up.  This drunk patron of the arts, it turns out, is with the blonde that keeps standing up for the express purpose of showing me her ass.
Two guys head back and get him, basically one guy on each arm picks him up and drags him back to the bar area.  They get the keys to the car from the blonde and drag him outside and leave them in her car.
Of course, he was just at the bathroom which means that his pants are not secured properly and as they are dragging him his pants are slowly coming off.  By the time they hit the door he magically turned into one of these new fangled cool black kids that wears their pants somewhere between their knees and the hole in their ass, except this guy didn't have the advantage of having underwear covering up everything else.
When they get back in they discover that this guy has a new, fresh beer that is untouched.  So, instead of letting it go to waste one of them decides it would be a great idea to just down the thing.
Within 30 seconds this guy is hunched over a garbage can and puking.
Once he is done with that, I'd say 2 minutes later, the drunk guy that they just dragged out to the car walks back into the bar, normal as anything.
Unfortunately at this point he pretty much starts dominating the attention of the blonde and is trying to get her to make out with him at the bar and blah blah blah.

Shortly there later a friend shows up so we can indulge in some pizza that I had ordered somewhere during the story I was telling above.
The pizza came out and it was average at best, my buddy didn't really like it.
I had not eaten but two salads in the last two days and average or exquisite I was hunger and devoured about half of it. Looking back now I think where the problem existed with the pizza is that the bread was a bit too thick and there really was not a whole lot of sauce on it at all.  The cheese and pepperoni were both good but there was just something lacking.
I could totally see myself devouring a lot of it if I were to drink at that fine establishment more often just because when drinking I heart bar food.  uh-huh.

The Labatt was exquisite though I wish they did have the light variety as I am trying to watch my waist, and by that I mean between the pizza and beers last night I indulged way too much and ruined a weeks worth of weight loss and work and promptly gained it all back.  Oh well, back to square one!

After pizza my buddy and I decided to go bowling.
I love bowling but I suck at it.  I haven't gone very often since moving to Vegas but this is something I want to rectify.  Other than my last game I'm ok with my scores, but that last game really was horrible.  I stopped hitting pins, I stopped picking up spares.  I pretty much just started sucking.  Maybe I needed more beer.

So, even though I only won 1 of 3 games, I still won the average war!

Tonight the Steelers play and it should be on TV. I might end up watching with my good drinking Buddy Melissa (whom you should all remember from The Dead Liver Diaries)  somewhere that includes beer.  Her mother comes into town tomorrow or Tuesday and I think I've got a night of drinking with mother and daughter, but only time will tell.

I almost hit publish and then looked at my title realizing that I forgot one last take away from being at the bar.
Between the drunk being dragged out of the place and ordering my pizza another patron of the fine arts entered the establishment and walked up to one of the servers and asked.
"I noticed the sign outside says you must be over 21 to enter, does that include kids?"
The bartender had to explain that being a bar, children were not allowed in or they would be subject to large fines.  This is why they have the rule of "21 or older."
To which the gentleman just stood there, unblinking and restated his question.  "Yeah, but does that include kids?"

Oh, to live a day in his mind with that dead gerbil.

Posted by grrouchie at 7:18 AM