After Multiple hours and a multitude of deaths I have finally beat Deadpool, the video game.  I really enjoyed the shit out of this game and I think it nailed the character perfectly.  Of course having Daniel Way (who wrote a lot of Deadpool comics) as the lead writer helped a ton.  If you want to read a review you can go find that elsewhere.  I just wanted to point out that I beat my first run-through of it and that I thought the game was awesome. 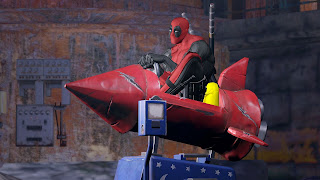 I've got to go back and finish some levels and earn a bunch of the extra trophies.  For the most part I didn't bother trying to get any of the trophies during my first run because I just wanted to focus on enjoying the game for all that it was worth.  But, since I liked it enough I'll go back and replay some of it (or all of it if I decide I want to get the trophy for beating the game on the hardest level).

So now, much like I said in a previous post, I beat a game and I will allow myself to buy a new game.  Since I already have Diablo 3 pre-ordered (but not paid for) I'll consider Diablo 3 to be the new game for me.  There are still a few newer games out there that I really want to pick up and play so I'm going to have to get to work on beating something.  For instance, I really want to play The Last of Us but have not purchased it yet.  I'm going to have to go through my back-log to find something to beat so I can grab that next time I see it on sale somewhere.
If I get bored today I'll go through my shelf of games and set aside the ones that I still have interest in while putting the rest away.  I do know that I need to finish the new God of War, continue playing Skyrim, Trophy clean up on Dead Space and Dante's Inferno.  I also need to play and beat Dead Space 2, Dragon Age 2 (though probably not till after I am done with Skyrim as I should limit myself to 1 RPG at a time) and a few others.  We will see where this takes me.
Oh, and of course I'll blog about it because I have nothing better to do :)
Coming soon a possible work related post - I've got a feeling....
Posted by grrouchie at 9:53 AM