Sleep is avoiding me

Tonight I took out my boy for his birthday dinner.  It was a good night over all.
During dinner I gave him his present which he was totally not expecting since we had just taken him out to Circus Circus a few days earlier as his "gift."
I gave him one of my old iPod shuffles and put a few songs on there that I know he really likes.
He put some headphones on and rocked out to it all night long.
I couldn't stop smiling with how happy he was just chilling and listening to his music... and singing badly along with it and making up most of the words but changing his made up version every single time.

Oh, it's truly a blessing to be a father. 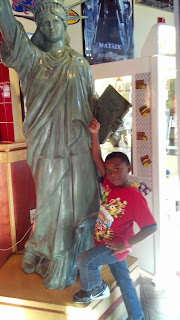 After parting ways with the family I really wanted to go out and play poker but two factors kept me from doing it.
1 - I felt like I might be getting tired soon and would have to cut my session short and I really, honestly, hate playing if I can't dedicate at least a 4 hour block to it.
2 - The 15 was backed way the fuck up both ways due to an accident heading South right around the Sahara exit.  It was backed up so bad that when I drove by the 15 South entrance from the 95, traffic was parked at that point the whole way back to the entrance.
From the 95 entrance for an accident down near Sahara?  I think I'll pass.
The die-hard's of you are saying "just take the surface streets you lazy bastard" to which I respond by sticking my tongue out in your general direction.

I came home and checked some Facebook and some Twitter.  I deleted a bunch of people I was following who no longer serve any purpose for me.
Basically I'm trying to get rid of my non-poker followings and get rid of the vast majority of the posters who have 20k tweets or more but none that I ever read and make me complain that I always miss the tweets from the people I want to read.
And I'm too lazy to do it through lists and have to pull up the lists through my phone all the time because, quite frankly, it takes too long and I don't have the patience for it.

Kids say the damnedest things:
My fiance was telling me the other day our little multicultural child asked her if we would be having other kids his color.
She had to explain to him that it is impossible because I'm white.
I told her that I've got my eye on her and we BETTER NOT be having any other kids his color :)

I want to get some sleep but I have a Silky Terrier in my bed - in the middle of my bed - wrapped up in the covers.
I generally keep two blankets at my bed.  One on the bed and one off to the side.  Most of the time when Monster lays down I am able to get enough blanket to cover myself and go to sleep but every once in a while he does it in a way that I cannot move the blanket without disturbing him.
This is when I grab the 2nd blanket and use it instead.
The other day he managed to position himself in a manner that I did not have access to either blanket nor 2 of my 3 pillows.
How in the hell does a 15 pound dog take up enough space to interfere with me lying down comfortably?
Better question - why do I take such care to not disturb him and instead contort myself around him as if he runs the place?
I love my fur baby! 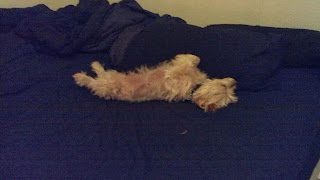 Also, last point of interest before I head off to sleep.
Child told me he wanted to watch Doctor Who with me.
I'd love for him to start watching at the new Season 1 - but I think the low budget might be a turn off.  I'm tempted to just let him start with the Matt Smith Seasons and go from there and if he really gets into it then I can take him back to the David Tennant Seasons and so forth!

Email ThisBlogThis!Share to TwitterShare to FacebookShare to Pinterest
Labels: Family