Next Month - Yeah, that's the ticket

There really hasn't been much going on this month for the grrouch!
I've taken the month off of my comic book obsession and instead have been reading through Stephen Kings's Insomnia during my reading hours instead.  It's amazing how much longer it takes to read a book than to go through a comic book.
I'm a bit over half way through and I'd like to finish it this month so that means I need to actually start reading more than 20-30 minutes at a time.  Whatever #1stWorldProblems.

Yesterday the NFL Draft started and of course I had to work through it.  I'll be working during today's portion as well and while we're at it the whole bloody weekend tool... So this means I'll play catch up on Sunday and read about how they think the Steelers had just an average draft and blah blah blah.
Evidently the Vikings really pulled out a good one or something.

Everything that is truly exciting for me starts happening next month so in the next few weeks I should have some good news to report.

I've had some fun struggles back and forth with the Mortgage company and the Insurance company the past month.  All is resolved but it was still fun as ever.

Next I get a letter from Mortgage company telling me that I don't have any insurance. I make some calls and once again it gets sorted out.

Or so I thought.  Yesterday I get a letter from the Insurance company telling me no payment has been made and I need to cough up multiple hundreds of dollars within 2 weeks or my insurance is cancelled.
So, today I call them and then call the Mortgage company and ask why they haven't bothered to send the payment and they say it's because they received the cancellation notice - but no one bothered to send the "oh we screwed up, Insurance is still on" notice.
So, a payment is being overnight-ed (and I'm told that means it will get there Tuesday and today is Friday... uh...) and all will be resolved.

So, next week I'll be able to make a few phone calls to find out that everything is now right with the world and there are no worries.  The sun is shining and the birds are chirping and there is a drunk pissing on the wall of a 7-11 somewhere.

I had a dream that I was at work naked (I don't remember having naked dreams as a child) and I was helping customers while holding a shirt over my tally-whacker instead of just putting it on and covering it up.
Some big black lady wanted to walk past me in the aisle to get to some product but the aisle was pretty narrow and she might have to turn sideways (I told you she was BIG) and might end up brushing up against me trying to get to her destination.
Randomly at the end of it I discovered that I was wearing underwear and then all my clothes started appearing out of no where and next thing I know I woke up because my phone was ringing.
It was the love of my life and I'll forgive her for disturbing my sleep!

Also - on Facebook a new page called Lowe's Meme's has popped up.
This is the most accurate picture I probably have ever seen in my life.  Enjoy. 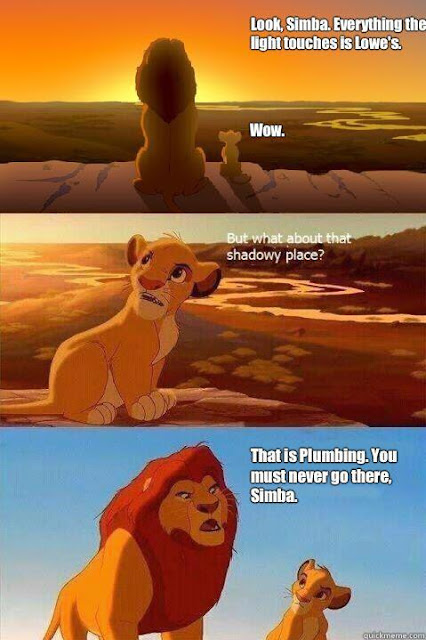 Posted by grrouchie at 9:21 AM