Man, I'm sitting here bored while the kid is sitting next to me playing Spider-man Web of Shadows on the Xbox 360 and I just finished a small session of Diablo 3: Reaper of Souls.

The whole reason I am bored is because I've got this deep down craving to go play some poker.  Oh, I want to stack some out of town fish and drink a few beers and come home a couple hundred dollars richer.

The wife is sleeping in the other room because she slept for shit last night and I'm about to flip a coin to figure out if I'm going to wake her up to let her know I'm going to play poker or if I'll just fire up a video game and do that for the rest of the night.

My first week of Sports Betting went horribly awry when the Saints, Patriots and Bears all decided that they were allergic to winning.  One or a combination of those teams cost me on every parlay card that I had out there.

Tomorrow I am planning on going over to one of the Stations and putting in a Parlay card and hitting up Alienate for their "Pick every game right and win $150,000" thing.
Right now my sports betting (in a casino) is at negative $20.  However, that will all change this weekend as I will pick better AND win at least one of my parlay cards.

Tomorrow is a busy day though.
Gotta hit up the DMV so that I can renew my drivers license.
Gotta baby doc appointment - this is the 20 week one complete with another Ultrasound which will depict my spawn showing off his wiener for the world.
There is Soccer Practice at night which I have wormed my way out of by telling my love that I absolutely have to watch the Steelers Game because I'll die if I don't.
I'll probably have to watch said game at a casino somewhere which will involve poker.  I could watch it at a bar but then I'd be forced to drink heavily and might require a ride home.

I should get a hold of the ford dealership and get my car in to have a tire looked at, it appears to be allergic to air recently. 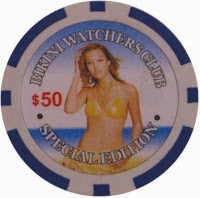 Posted by grrouchie at 6:59 PM