Cleaning out my Closet 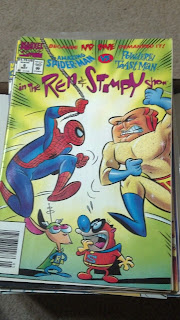 Today I decided to make some more space in my closet.
Not actually make some space, but to make it appear less cluttered.
So, I took a bunch of totes that were cluttering up the place and moved them into my mostly empty spare room.
The same spare room which eventually I want to turn into a game room.
Eventually.

However, I briefly went through some of the totes I was moving and found my old comic book collection.
By old I mean back when I was in High School, 1993ish.
Funny thing is that as I was going through them (and there weren't really a ton, maybe 50 total) I smiled at some of the stuff I had. 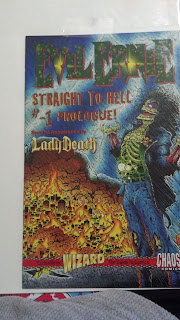 I also know that I quit buying them back then because it was too expensive of a habit.

So, what I found was some Ren n Stimpy.  Almost the entire run of Beavis and Butt-Head.
Evil Ernie 1-4 with a special edition intro -1 book I think (it was a mini).
I found 3 different Rock n Roll comics, 1 Anthrax and 2 Guns n Roses.
I found 2 Mankind #1's.
Spiderman vs Powdered Toast Man!!!!
A couple random Superman issues from around the Death of Superman time period.
And 1 X-men issue where Wolverine ends up killing a robotic Hulk.

There might have been a few more, I haven't gone through them too thoroughly yet.
Memories.

Posted by grrouchie at 9:05 PM