Nobody wins in poker long term

Poker Grump knows how to cheer someone up when they're down.

You see, I had a twitch, an itch, a wild hair up my ass (call it what you may) and I decided the only cure was some poker.  Because I happened to randomly check Twitter (and it's very random that I do that) I saw that the Mirage now gives $2/hour comps (And I sure hope they stay on the card and don't need to be printed off via $5 coupons that expire after a week like before) and I thought that I should head there for the games.

Within 30 minutes of me sitting down and playing I had already dropped 3 annoying hands for more money than I cared to.
The table was tight and ready for someone to play aggressively and win some pots, it just so happened that I got the cards to do just that.  The problem was the rest of the table was not cooperating.

My first raise was called two ways and while I flopped a good hand I lost money to a guy who limp called my raise from early position with J6 offsuit and flopped two pair.  He played it passively and I didn't lose too terribly much.

This is when I received my "pick-me-up" message from the Grumpmiester himself.

A little while later I decided I needed to show a profit so out of the blind I called a small raise (as did half the table) with 44 and flopped a 4.  I bet into the raiser who called my bet as did one other person.
The turn brought a beautiful 4 and I led out again and was called.
The River did not bring a 5th 4 but I bet out again and was called.
I showed my Quadalicious and got to play on some sort of Video Poker Machine in order to try to win $45,000 which did not happen and as such I took my seat and waited to collect my lowly $100 instead.

A short while later I got Aces in the small-blind.  I made a bigger raise than normal and got called 6 ways.
On the flop I bet 2/3rds pot and got called by one player - the worst player at the table.
On the turn I led out a bit larger than my last bet and was called.
The river brought 100 different annoying cards and I check called $50 only to see that my opponent had turned his gut-shot to take a big pot off of me.

Here is a hand that was kind of fun.
I have no history on Villain.  He is an older white guy but I have no reads.
I have $200ish and cover Villain.
I am in a blind with QTs

Flop comes out QT4 - with QT are hearts.
I check and Villain bets out $15.  It folds around to me and I make it $55.
Villain calls.
Turn (~$140)
Turn is an Ace of not hearts.
I bet $70 and Villain pushes.
The Push is for about $80 more so I feel this is a clear call.
For the life of me I cannot put Villain on calling my flop check/raise with KT unless it happened to be hearts giving him a Royal Draw to go with it.
There is the possibility of 44 for the flopped set.  I'm not sure he'd play TT so passively Pre but I guess we should include that in there as well (discounted because I also am holding a T).

After some debate I called with my top two and Villain immediately flipped over Triumphantly his.....
Q8 off-suit.
The only thing I can think of is that he put me only on a flush draw.

The river is meaningless and I rake in a nice sized pot which gives me profit for the evening. 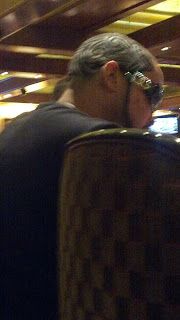 Overall it was a good table with one guy who was making some large ($30-$45) Pre Flop Raises and getting lucky (Flopping two 2 with TJ and turning Trip 9's with Q9o) and raking in a ton of chips because of the luck.

When you have amazing hair like this guy it's not hard to see why the poker gods smiled upon him.

His hair is short - there are no braids.  That is actually a pattern shaved into his head that goes the whole way around, just not on the top.

Oh bless his awesome heart.
He also wore a huge gold watch and his glasses say DG on them, which I can only guess means Damned Good!

When I left he turned his $200 into well over $700 mainly by winning two large hands when he made huge raises pre and nailed the flop/turn.


The only other thing to report is that fellow blogger Yakshi recently posted a song by some rapper I have never heard of named A$AP Rocky.

On my way into and exiting the Mirage Poker Room this evening I happened to spot this.... 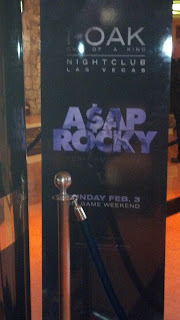 Summary, in True TBC Style - my Live Bankroll now sits at $150 but I fear that this might not last too long.
You see, VD is coming (make all the VD jokes you want) up and I've got a present and a dinner to afford.  So, I fear that my bankroll might be going back down to ZERO unless I can find a way to run it up and make some more money quickly.
Damn women, always raiding my wallet.

Posted by grrouchie at 1:15 AM