Easton Calling Games is Good for the NFL

Anyone that follows the NFL this year knows about the whole saga of replacement referees.  Fortunately that mess has been cleared up and we have the proper zebras back calling the games. 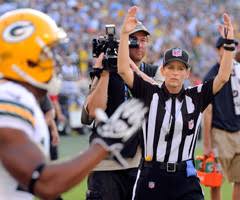 I wonder what will happen to Shannon Easton now that the refs have been calling games again.  For those of you that are just straight football fans, that was the woman that was a replacement referee.  Those of you that follow poker know her as the female ref who was getting in trouble due to her past as a "pro poker player."

The NFL's antiquated policy against gambling nearly cost her job before she ever got a chance.  For those of you that aren't familiar with the policy, if you are in the NFL or work for the NFL in any capacity, you are not allowed to gamble.  Their policy is so extreme that they snubbeda poker charity event in Las Vegas because it was held at the Golden Nugget.

Fortunately the league realized that was not a threat to fix games and let her call games while the referees were on strike.  She was the first woman in league history to officiate the game and officially broke the gender barrier in the game, at least where officials are concerned.

The question now remains whether or not will get to officiate games in the future or if this will be a one-time thing that only came about as a result of the referee strike.  If that is the case, it would be a shame.

calling games in the NFL isn't on par with Barbara Enright playing the final table of the P or Vanessa Selbst dominating the modern game.  Women are never going to be a major part of the actual on-field game due to the fact that women do not have the same physical attributes by and large.

However, they do have the ability to call games the same as any male.  It would be great to see return to the field as an official next year with a full time gig instead of a replacement gig.  Just as women are "good for poker", would be "good for the NFL."

-----Post Script -----
grrouch here - the Above was written by one of my silent readers who recently contacted me about making a guest post touching both on Football and Poker and I figure'd that it seemed like a great idea.
The information above is info that I actually knew nothing of because I was too busy living my own life and ignoring what goes on around me but is great knowledge to have.
Posted by grrouchie at 7:55 AM