Growing up Halloween was pretty much the number one holiday for me.  I didn't much care for any of the others and to this day I still take that exact stance except I have let my love for Halloween waver over the last number of years as well.  However, this year I've been reconnecting with it mostly through the eyes of a child again.

The past couple of nights have been spent going places that are mainly designated for kids but I've been having a blast walking through them and getting to see the excitement of this holiday from a kids perspective again.  The other night it was The Pumpkin Patch (not sure on the name but it sounds right) where there were some games and some rides set up for the kids and even a petting zoo and a bungee jumping area.  There was nothing really spooky about this place but the decor was nice with pumpkins everywhere to guide it.  Overall a small place but it was a lot of fun for me to watch all the little ones enjoying themselves in the name of the holiday.

Last night it was the Springs Preserve which was a lot larger and involved a lot more walking but not any less  fun, in fact I enjoyed it a lot more myself because of the set up.  There was an entrance fee to get in but that allowed access to one set of carnival type games for the kids where they were a guaranteed winner and got a prize after each set of games, I believe there were 10 in all.  There was also a performance stage where I never actually saw a performance go off but they played some great music all night culminating in the Ghostbusters Theme, Thriller and The Monster Mash as we were leaving the park.
There was a Trick or Treating area for the kids which we were not aware of before entering but that made no difference as our tiny guest quickly lost care of the fact that he was not wearing his Halloween Costume and just enjoyed going station to station to get his candy.  He never paid attention to the fact that each station had a particular theme like I did though as he was too interested in the pending sugar rush.

Each Station did have a unique theme from the Ghost Grotto to the Witches Lake, it was quite a site.  There were also a couple of interactive area's like the Mad Scientists area where there were two mad scientists showing kids some interesting things like a fish bowl filled with goop (which they could take a sample home with them - filled with SPIDERS of course) and a smoke barrel that blew out smoke circles when you smacked it on the bottom.

Finally, and of course my favorite, was the Haunted House.  Nothing extreme or overtly fancy but set up with a few different thrills and chills leading up to the last one which was an animated giant squid that appeared to be trying to get at you.  I bid my time nicely walking through the entire thing waiting for this one moment and when I saw it, I seized it and grabbed the mother making a loud scary noise to get a rise out of all near and with me.  Definitely a perfect way to end the haunted house making sure that everyone got a scream.

This is the type of stuff that I stopped doing and I have not damned idea why.  I have no good excuse. I love this holiday and got away from it.  But that shit stops here.  There are a number of other attractions in Las Vegas during the season that I really want to see now, things I have skipped over the years and told myself I wanted to go to but blew off.
So, I've got at least 3 more stops on my Halloween Tour this year including the Fright Dome which has a Ramero "Dead" exhibit this year.  Then there is the Bonnie Screams thing (Bonnie Springs is an old west area for kids that involves a few plays, a petting zoo and a restaurant that we took the kid to earlier in the year and it was pretty fun.  Looking forward to seeing the UNDEAD version of it, muhahahah) and this year Eli Roth has decided to make his presence felt with Eli Roth's Goratorium located somewhere on the strip.  This is the one I'm really looking forward to as it will be much more adult-centric and I might end up having to go without company.  However, I expect it to be a blast and probably also very disgusting! 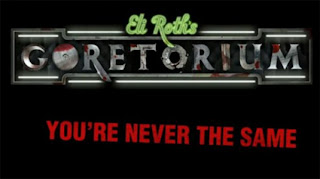 So there you have it, I've been abscent from the blog a bit lately but I've been getting in touch with my inner child.  I've bought a couple of small decorations for the house just for my benefit that includes fake blood on my patio door, some pumpkins and skulls to decorate a window or too and some pumpkin lights that I"m probably going to throw on the entrance door.  Work has a few more things that I"m just waiting to go on sale to grab up mainly for next year.
The Halloween stores that I've have gone to have gotten me a bit giddy as well when we were searching for Halloween costumes for the kid.  I loved the Spirit store mainly because they had a good number of really creepy looking zombie babies that I want - one was chewing its own foot off.  Oh delicious thing you were.

Next year I've already decided that I will be putting a budget aside to get some permanent Halloween decorations that I can put up every year around the house and outside the house to show off my life for the season.  Everyone else can have their Xmas, give me the blood and gore and decorations of this un-dead holiday and I"m going to be a happy camper.

In the same vein I've been watching Season 2 of The Walking Dead and I just bought 50+ horror movies in various packs (for under $20) to keep myself (and the old man) occupied through the season.

Posted by grrouchie at 4:58 AM

Email ThisBlogThis!Share to TwitterShare to FacebookShare to Pinterest
Labels: Holidays