Sometimes life is going to well and it just has to bitch-slap you back to reality.

This is what happened to me recently when my car decided to develop some problems.
I guess the problems have been developing for a while but nothing that was noticeable to me until it was too late.

I'm not a car guy so I won't begin to go into what was wrong with it, but it all came out to the tune of about $2200 after repairs and rental car.

And to leave on something positive - a pic I took of the new Deadpool comic.
By far my favorite character and will end up with him or his logo tatted on me at some point (Though the lady is not into this idea).
By far the best Marvel NOW title out right now (my opinion obviously).

Until this year I never would have caught the Spiderman reference in this picture - but it sure does make me giggle (Deadpool does that to me often). 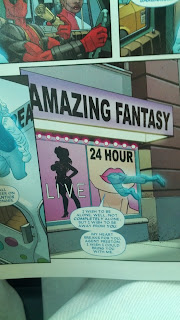