Weddings are an anomaly it seems.  Everyone appears to want to attend them.
I'm convinced it's just for the free booze and food that is provided by either the poor saps who are entering into this unholy matrimony or their unsuspecting families that actually believe the bride and groom have 250 friends and/or family that they love enough to invite to such an occasion.  The reality is that nobody loves that many people from their family and nobody really cares about that many friends either.
Weddings are a social occasion, a really expensive social occasion, that ends up being way bigger than they should because people just don't have the inherent ability to say "NO." 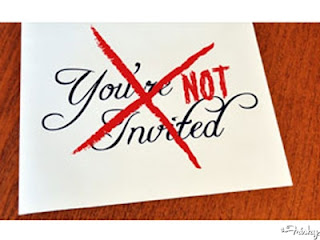 NO.  The buck stops here.  Not with my wedding.
My wedding is going to be a small occasion and we are maxing out at 40 people (plus a few of their kids).
As time goes on we keep thinking of other people that we maybe should be inviting, at least that was until I started doing some number crunching. 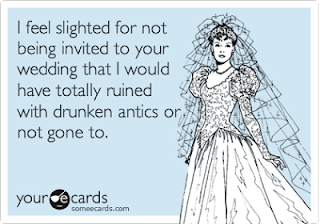 Yes.  I started out struggling to come up with even 10 names of people whom I really wanted to have attend my (ruptured) nuptials.  But over time I have remembered a few more people that I truly believe I cannot live without them attending.  Then I have added some people to the list that I thought would be good if they could attend.  We both did, the list grew.  We keep remembering people.
Lightning warned me that this was one of the trickiest processes of the entire wedding planning.  Bastard was right. 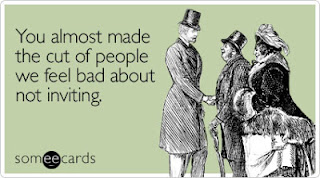 But, back to the numbers.  I'm a cruncher.  I like to budget and then do the budget 5 more times from scratch to make sure I'm coming up with the same numbers, the right numbers.
As our invitation list grew the dollar figure got bigger.  Once I ran the numbers a few times and saw what we would be spending we decided to have a heart to heart and make some budget cuts.
This includes people, some tough cuts and some not so tough cuts.

I'm not hungry but I want a piece of cheesecake.

We originally told ourselves that we wanted 40 people at most at the wedding/reception.
We are currently at 20 for the ceremony and 40 for the reception.
We've made the list a few times and it's now separated into tiers.
People we can live with and those we'd like but aren't worth the money.

OK. I admit that last line was a bit harsh.  I truly believe that all of my friends are worth the money - but more so if someone else is paying :)

I once had an uncle who invited people (including family members) to his daughters wedding with the caveat that the reception cost $xx.xx per person and if you intended on attending you needed to RSVP and include that money with your RSVP.
I'm pretty cheap but even I believe that that's pretty fucked up.
I dunno, maybe that practice is more common than I think but to this day it was the ONLY wedding I was ever "invited" to with such a stipulation.

So, back to my original thought process.
Invitations are not like candy.  Not everyone can get one - it's an annoying fact.
However - to rectify this situation I am currently planning on creating fake wedding invitations for those who I am thinking of but can't actually afford to invite to the wedding.
This way they will know that they were in my thoughts but weren't worth the money to actually invite (so to speak). 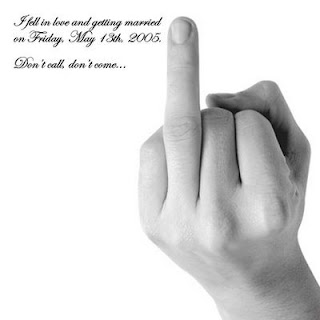 Email ThisBlogThis!Share to TwitterShare to FacebookShare to Pinterest
Labels: Engaged