Today we have our first Special Guest Post of the month and kicking it off is MissingFlops.
I'd give a better intro but I just spend the last 12 hours sleeping and have to run to work!!!

Well I’m happy to lead off the guest posting for grrouchie’s alphabet project. Grrouchie
assigned me the letter F which is, of course a letter rife with possibilities. It occurred to me that F could
stand for Football, but I’m a Seahawks fan, he is a Steelers fan and that was just going to lead to some
very dark places. F could also stand for Friends which has been one of the side benefits of blogging
and playing poker. Since poker is a common bond for most of the readers here I thought I could talk
about Folding which may in fact be the most important poker skill there is. Of course, F obviously makes
one consider the various ways to center a post around certain adult activities … who knows, perhaps
Grrouchie assigned me this letter in the hopes that I’d deliver a post talking all about salacious activities.
I’ll admit that I considered doing so for a moment, but in the end I decided that F stands for Feline and
that I am going to tell you the story of my cat.

Ladies and gentlemen, let me introduce you to Posh. 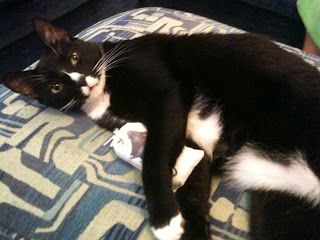 Posh is a male cat who is around 13 or 14 years old. I first met Posh due to Mrs.
Flops, who back then wasn’t Mrs. Flops. In fact, back then – I was in the dreaded friend zone. At the
time I was living in a rented condo and the not yet, but eventually Mrs. Flops had recently moved in to
share the place with me. She had brought along with her two cats that had been her pets for a while.
This was an interesting development as the terms of my lease were pretty clear that pets weren’t
allowed. The two cats were well behaved though, confined their bodily functions to the litter box and
didn’t cause any trouble.

Now Posh was not one of the aforementioned cats. Really, that would be kind of a boring story.
No, Posh was actually the subject of a call I got from my new roomie a few months later. It seemed she
was walking out to her car after work when a tiny face emerged from a bush that was next to her car. It
was a stray little kitten who apparently looked like it was much in need of a home. So that’s Posh right?
No, Posh was one of the three other little faces that emerged from the bush after the first one had
hooked in the Eventual Mrs. Flops. One of her work friends dashed into a nearby grocery store to get a
box to gather the brood in. Now what? Well, the Eventual Mrs. calls me at the office crying about how
she found these little kittens and they need a home and can’t we watch over them for a while? I don’t
know if she thought I was going to put up some resistance to the idea what with the lease situation and
all, but really, after you’ve crossed the line of breaking the lease by bringing in two full size cats, there
really isn’t any problem with bringing in four more, especially when they were small. So, I entered the
kitten rescue business.

We couldn’t get the new brood checked out at the vet till the next day, so to make sure there
weren’t any issues with them having any kind of disease that would get passed on to the previous two
cats we kept the kittens in a box with some blankets in the garage that evening. During the evening I
went down to check out the new arrivals. I looked into the box and one of the little ones looked up at
me and caught my eye. I reached in to give him a few pets and he played with my hands. Do you know
about imprinting? Well in that moment, Mr. Posh and I imprinted on each other.

Why Posh, you ask? Well that name was determined the next day at the vet’s office. We
had these four little ones wandering around the exam room while we were waiting and it was clear
that there was enough of a connection between the little ones that there should be some connection
involved in naming them. There were four of them, it was the late nineties and so it was pretty easy to
stumble on to … the Spice Kittens. Sure enough, we had a Baby, a Sporty, a Scary and a Mr. Posh (we
conveniently overlooked any gender implications of the names). Scary and Baby quickly found new
homes but Sporty, and of course Posh, remain with us to this day.

I can honestly say, I’ve never had a connection to an animal the way I have to him. He knows
when things aren’t going especially well for me, and during those times, he is always seeking me out to
cuddle. If I’m sitting somewhere he will usually come around looking to crawl up in my lap. It goes back
to that imprinting moment when he was in the box down in the garage. I looked down into that box, he
looked up at me and he chose me pure and simple. I am his human – sometimes he lets me think he is
my cat. I get sad now and then because I’m realizing that I’ve had more time with him in the past than
I am going to have in the future, but when those thoughts creep into my head I just try and push them
out. He’s still in great shape and still loves to run around the house and play. I know he’ll be around for
a while longer and I know that regardless of how long he is here he will always be my boy.

Posted by grrouchie at 4:53 AM