However, Carmel suggested dreams and when I mentioned that I rarely ever remember them she said "not that kind."

So, Dreams it is.

When I was a small child I had one reoccurring dream which was really a nightmare.  I was being chased by the incredible hulk.
Now you see kiddies (and I know most of you are older than I) what makes these dreams scarier is the time period.  Oh the hulk in his animated form is all cute and cuddly sometimes and then there are the two kinda sorta recent Hulk movies that came out where the hulk is this big CGI green guy who can jump over mountains and throw shit to the moon.  However, none of these versions is really that scary to be honest.

No, I was afraid of the scary hulk.  Lou F'n Ferrigno all painted green with his scary little fro and his ugly bulging muscles in that ripped pair of shorts.  THAT  was f'n scary.  And that was what haunted many dreams for me.

It started innocently enough where I was out in the park playing when I caught a glimpse of him and knew that I needed to escape.  So, I did what any reasonable kid would do in such a situation - I jumped on the swing and started rocking back and forth and kicking my feet for all their worth to go higher and higher and higher until I almost flipped over the bars.  At this point I let go and flew through the air landing on my porch and ran inside as quickly as I could.
Inside my older girl crush babysitter was waiting for me and making popcorn while I was trying to block the door as much as possible. She kept asking what was the matter and all I could say is that "he" was coming for me.  Finally after a few good bashes the door busts open and there he stands, big tall and ugly and this is always the exact moment where I woke up and was glad that Lou was just imaginary.

My second dream is a little bit more on the strange side and I had this one during my teenage years.
I was walking through my neighborhood when I decided to pay my friend a visit.  I walked up the steps to his porch and knocked on his door.
His mother answered but she was no longer a human, she was a Sea-Monkey. 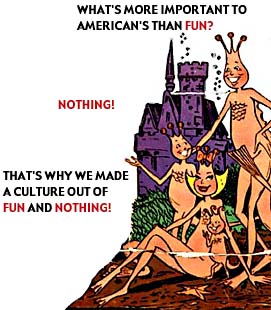 In a panic I took a step back and noticed his step-father coming to the door a Sea-Monkey as well.  I turned away from both of them and the whole neighborhood was actually Sea-Monkey people which set my mind spinning.
I jumped over the railing from his porch to get away from the creepiness and landed squarely in a Frying Pan.
And this is where I woke up every time.

My third (and final) reoccurring dream probably doesn't describe well but it unsettles the fuck out of me.
I've only had 3 dreams my whole life that I know for a fact reoccur and this is the only one that has also lasted into adulthood (though it's really rare).  I'm assuming it's caused by stress.

A lone marble rolls down a straight pathway (I'm seriously starting to feel weird just thinking about this and typing it by the way - my description probably will be shit and I wish you all could see my mental image and everything else that goes with it).  The rest of everything is dark - as if the marble has a spotlight on it or just radiates light.
Everything is going smooth for a while and then things slowly start to get a bit chaotic.

Remember that scene from The Ring where the creepy chick is in the tv - then there is a glitch and she is no longer where she was.  Then she keeps "glitching" and moving and eventually coming out of the TV?

Well, this scene is very similar to that.  The marble glitches and breaks its course and with every glitch the marble gains speed.  At the same time this is happening there is background noise.  Mostly voices but nothing you can make out.  Picture a scene where there are 100 people standing in a room holding random conversations and you spot your friend who is trying to shout something to you.  You stand there trying to make out that one voice with all of the others going on around you and You think you can almost make something out but you never catch any of it.  Now picture your friend "glitching" to different locations of the room and you have to quickly scan the room and find out where he is to try to catch his voice so that you can get a clue to some very important puzzle but every time you think you are about to get some where - BAM another glitch to elsewhere.

This would be kind of similar I guess.  The faster the marble goes the more it glitches, the more voices are added into the mix and the more my mind starts to race and the less sense it all makes Until everything is ONe big fucking SounD waVE jumping arOUNd spORaDICally and your brain staRTS twiTcHing ranDOOMly because tihgns ARE getTnIG too HECtiC but you KNOw tHaT akj;lsdfkla;sdf

And that is where I wake up, very uneasy. Very disorientated and it takes a few moments to actually figure out where I am and if it's OK to move but the uneasy feeling generally stays with me for a while.
In fact, I now don't know if I'm going to be able to fall asleep like I had planned (after hitting the publish button) because just thinking about that really messes with me.
Weird shit man

Posted by grrouchie at 9:11 PM