My Thoughts on Gay Marriage

Like the old Pringles commercials "Fuck who you want, we'll make more." 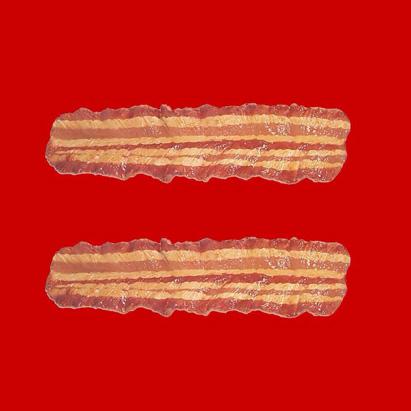 Who cares? Right?  Pro? Con?
Blah Blah Blah
What I do know is that I support the rights of people to eat Bacon.

Facebook has become doomed with the equality sign recently and I pretty much only favor the ones done in jest that make me smile.  The world is talking about if a man and another man and a goat can legally become married and make each other miserable for years and years to come.  Well, why not?  It's not just straight people who can drag each other down and then get a divorce and fight for the belongings.  I think everyone should have bacon rights!

I'm not saying that it's wrong or right (if it feels good can it really be wrong?) I'm just saying that those opposed to it shouldn't get a say in the matter.
If you don't want gay marriage - then don't marry a gay.  You made your choice and they are making theirs.  You don't get to tell me what I can eat for breakfast so why should you tell me who I can pledge my life to?

GFY you crazy leftists (or is it rightists?) bastards.  There always has to be a big controversy to keep the country running it seems.
Blacks are evil and must remain separate.  Well, we can tolerate them but they can't be with my child.  Stop mixing the races.
Oh, we hate the gays - You're not allowed to fuck that other guy because I think it's gross.  Ok, we'll tolerate you now but don't tell anyone in the military!  OK Fine - just don't get married and that will make us happy because we'll still be able to believe that we are somehow superior to you because we can do something you cannot.

If it weren't for the fact that I'm absolutely in love with a non gay member of the opposite sex right now I'd run out and get hitched to another dude just to piss off the people who are against it and trying to make sure it can never happen.

grrouch out
mmmm, bacon
Posted by grrouchie at 9:57 AM