My good buddy Jason is a huge die-hard Bengals fan who scored tickets to the Monday Night Football game against the Ravens.
Right now it's 41-13 and I'm pretty sure he's miserable as fuck sitting there and watching his team, whom he had huge expectations for, get walked on by the Ravens as if they were playing the Cleveland Browns.
Ouch

At a meeting with a bunch of my peers at work I had my store manager compliment my writing style and the way I convey my messages and then tell me, in front of everyone, that I should probably be a professional blogger.  Thought that was a cool vote of confidence.

One game does not make a season.  The Steelers might have lost the first game but I'm cool with that.  They lost the first game last year and still made it to the playoffs.  Manning looks like he didn't take any fucking time off, the guy is sick and deserves to own every passing record there is.
Once again the offensive line decided to crumble during the game, losing both the Right Tackle and the Right Guard during the game and having to play with two back-ups.  You cannot win in this league if you cannot keep your guys healthy enough - especially the big dogs who protect the quarterback.  This is a QB driven league.

VonMiller is as good as advertised, he makes you look silly.  Reminds me of Freeney when he was younger.

My Strat team has a decent start to the year but only one performance that screams amazing.  Spiller filling in for an injured Jackson did a great job and will have 4-5 more weeks where he gets almost all the touches.  Hoping he can continue to put up good numbers during that time. Rashad Jennings, who I really had high hopes for, decided to blow his opportunity by getting injured which brought MJWhaaaa in to get a bunch of touches.
Tom Brady was Tom Brady, my receivers got a few catches and no one really stood out on Defense.
Worilds had a sack which was nice, one of my Defensive Ends had a sack and one of my Defensive Tackles also grabbed a sack.
The only horse I have in the late game tonight is Ronnie Brown for the Chargers.  Hope he breaks out with a good 25 touches and 120 yards rushing, but I'm not expecting it!

Today was my first (and only this week) day off after working the past 15 days straight. 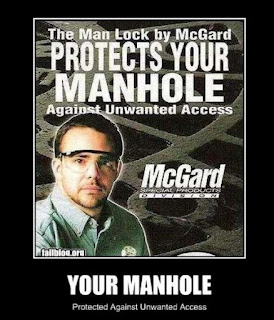 My Manhole is protected.

Finally - today is my parents 26th year wedding anniversary!  Twenty Six Fucking years of putting up with each-others shit, bitching and moaning, fighting and making up and mostly importantly 26 years of unconditional love.
These two fine people are the reason why I am who I am and I can never thank them enough for the love and support they have shown me over the course of my few years of existence.
At the end of this month they will be moving one more time, One FINAL time and I hope that I get to see their 50th anniversary.
I hope that one day I am lucky enough to find someone to put up with my shit for even a decade let alone 26 years!

Posted by grrouchie at 7:26 PM