I Dream in Spiderman

It's 3 a.m.
I should not be awake yet I cannot sleep.
I've still got the remnants of my week long cold, but at this point it's only a minor cough.  So, the theory goes that any day now I'll be back to my normal self.
However, when I lay my head on my pillow last night I was 100% exhausted and thought that I'd be getting a great night of sleep.
The past hour or so I've laid in bed, trying to get my closed eyes to will my body to sleep again but it was not to be.  Counting Sheep does me no good.
I figure this is a good excuse to make a really random blog post right?

Tonight I dream in Spiderman. I don't really ever remember my dreams, they escape me the moment I wake up but I can remember bits and pieces.  I remember Spiderman.  I remember nondescript bad guys and web-slinging and a couple of KRANTZ's here and there.  It never ceases to amaze me when you emerge yourself in something so much how it affects the brain.

Last night before passing out I finished The Amazing Spiderman #50.  Reading from the beginning like I am really makes me want to do the same for other series as well.  Maybe Series that I would never normally give a try like Daredevil.  Daredevil and Spidey have some interactions over the course of the first few years that I've been reading and of course with the crossovers I feel like I should be doing comics justice by going back and reading at least some of the crossovers. All in due time I guess.  I've got a good 30 more years of life in me to catch up.


Tomahawk is one of many Mike Patton Projects.  Patton is pretty much my favorite vocalist, the man is amazing with his range and what he can do with just vocals.
Some of his other works include Faith-no-More, Mr. Bungle and Peeping Tom.
A few weeks back I was listening to Tomahawk's 3rd release, which I've never really liked, and wondering if there were going to be new music from there.  Their 1st album is by far my favorite and I love the 2nd as well.  The 3rd was probably just a bit too experimental for me but that won't deter me.
So, while not sleeping I noticed a buddy of mine posted the above link on his Facebook - The new Tomahawk album in it's entirety on YouTube.
It's 3:18 a.m. and I'm not really up for listening though the 1st song that played through was enjoyable.
I'll give it a more complete listen some other time, but I wanted to share a band that I really enjoy with the rest of you.

Back to Comics.
Now that Batman #17 has been released and the entire Death of the Family crossover has been released I'll finally start reading it.  I love the Joker and cannot wait to see what happens there.  I'm still playing a bit of catch-up with the other titles involved so that I know the cast of characters beforehand.
I think I've only got 4 titles left, Suicide Squad, Red Hood and the Outlaws, Teen Titans, and Batman and Robin.
Obviously it's not necessary for me to actually read all of their New52 story lines up until the point that the crossover begins but that's what I plan on doing.
I'm hoping to knock them out before the end of February so that I can spend a good chuck of February reading two "events" - one from Marvel and one from DC.  The Marvel event being AvX (Avengers vs X-men).  I really wanted to read that one when it was going on but with the crossovers and whatnot it was too much to tackle.  However, I recently downloaded a torrent that has every single issue of every comic that was in the crossover and pertained to the story and I think it's going to make for a fun ride in March.
After that I can then spend time getting caught up on the whole Marvel Now Movement and see what comics I might enjoy from it.

And - continuing on with Comic Books - I guess it's all I have on my mind right now.

Speaking of Excessive.
Justice League of America issue #1
1 Variant cover for every single bloody State.
You can buy the entire set for $149.99 if you'd like.
I'm sure there are collectors out there who will do just that, in fact I want to.
I, however, currently cannot justify owning it.  If I could look into the future and get a feel for the future price value of having an entire set of 53 copies of Issue #1 then maybe - but as for right now I just give it a bit WTF man, wtf.
But man, I sure as shit want to do it.
And I don't even f'n like Justice League (thought this is without Superman so maybe that would make it more appealing to me).

Maybe it's just my age creeping in and I have trouble remembering details from my youth, but did schools always close for Presidents Day? Is this an actual, honest-to-goodness, celebrated holiday that we give kids the day off (actually two days off for a 4 day weekend) so that they can think about what Honest Abe and the OG G.W. brought to the table?
Maybe it's just that I never bothered to pay attention in the 3 decades or so since I've been out of school.

3:41 a.m.
Between this and a few Facebook moments I've kept myself busy this hour.
Sleep is not setting back in.
I began to make a list of Video Games to play/beat this year.
I'm going to go with favorite franchises that way I know I already love them.  Nothing new that might not grab me and just make me turn back to....uh.... not playing I guess.
God of War Ascension, Gears of War Judgement, Borderlands 2, Fallout 3 (Need to beat the DLC) and Skyrim are the games that came to mind immediately.
There is a good mix in there as well.  Over-the-top action, 3rd person shooter, 1st person shooter and my beloved RPG.  All PS3 and 360, no handhelds.  I feel as though I should add something from the Wii in there but as of now the Wii isn't even hooked up.
Maybe later this week 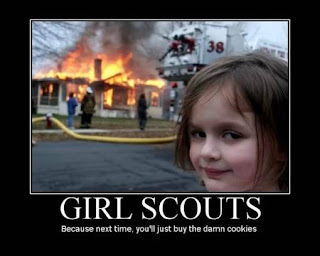 The Girl Scouts are Evil.  I suppose it's not really their fault but I like to place blame.  This past Wednesday I agree to endure Lent with my lady.  I think long and hard (heh...good one Beavis) about what I'd be willing to give up and I decided that snacking was perfect.  I've been looking for a way, a reason, anything to cut back on the amount of snacking that I have been doing.  Weight Loss is still going well and I know that cutting back on some more of the garbage that I put into my system will only help and continue to propel me towards my ultimate goal (which, in all honesty, I don't know what my ultimate goal is for my weight.... so lets leave it an open mystery).  So, I give up snacking. No chips, no Combo's and et cetera.  For the 40 days of Lent it's just a diet of healthy snacks like Fruits and Veggies.  It is going to be hard but I didn't realize.
Two days ago the Girl Scouts started camping outside the exit doors at work.  WTF.
I have a weakness for their cookies, Thin Mints specifically.  They are not the only cookie I like but the others I can get at Walmart cheaper and they taste just the same.
I am an impulsive person.
I see Girl Scout Cookies, I want Girl Scout Cookies.
Yesterday I did not pack a lunch for work - I craved cookies.
I went to Fresh n Easy to buy lunch and wanted to buy some PB Cups, some Chips, something.
Instead I went for yogurt with strawberries, grapes and blue berries mixed in.
It was delicious but it was NOT a row of Thin Mints.
In time the cravings will dissipate.
I still have half a box of Swiss Cake Rolls in my freezer.
I'm thinking about buying two boxes of Thin Mints and putting those in my freezer too.
They can keep the pet hamster busy. 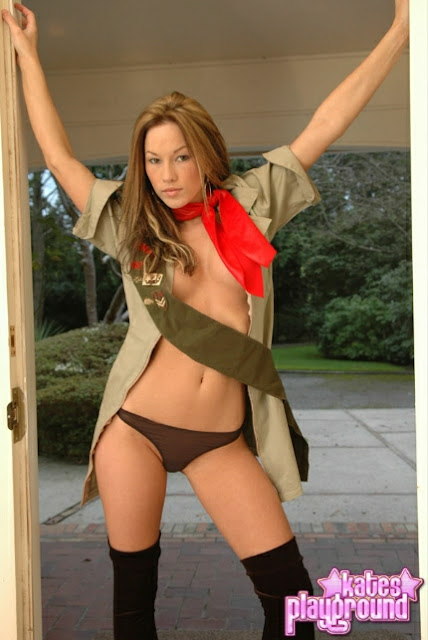 Finally, for all of you who actually made it this far (maybe you are just looking at all the pretty pictures and not reading the words?) I give you this.  It's kind of my, "Hey, Rob needs a reason to have kept reading this long" moment. If I ever were to run across this woman I'd buy all of her cookies.  Even the Girl Scout Variety.
4 a.m.
Posted by grrouchie at 3:59 AM