Here is a picture found on an old email address from a 2002 gathering to play Strat-O-Matic Football. 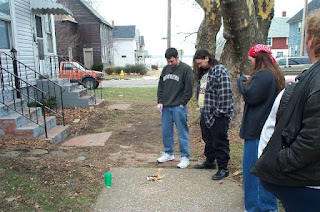 Matt, Serge, Tricia, Joe
The year was 2002 and the cause was Football baby.  A Fantasy Football game based on last years stats played with cards and dice.  Pretty much my favorite thing in the whole world, at least when playing the game face to face.

The back story.  My good buddy Matt was playing his Rival Joe whom he could never seem to beat.  So, with a playoff birth on the line Matt proudly proclaimed that if he didn't beat Joe he was going to just set his cards on fire.  The reason for this declaration is because Joe was not really the best of players.  He relied on the strength of his cards to bail out is sub par coaching abilities.  Matt made the proclamation because he knew he could out-coach Joe and was not going to accept defeat.

Well, some things are not meant to be and Matt ended up losing.  As soon as the game was over we got to follow Matt outside with his cards in hand and watched him light them all on fire.  It was a lot of fun.

10 minutes later was even more fun as Matt realizes he forgot to pull out his prized Barry Sanders 2000 yard card from his current team as that was the one card he wanted to save.

It's amusing to look back on old pictures like this as the saying is true, a picture really is worth a thousand words (or more).  I'm sure I didn't use my full thousand above but there is a lot more that I could write about this picture, this gathering, this one day frozen in time that luckily was captured to remind me of good times and old friends.

I love looking at this picture and noticing the differences between then and now.  I was still a fat bastard, but you can tell from the hair that Genetics had not yet caught up with me.  A decade later I am forced to keep my hair short because it's way too thin on top to ever grow long again (maybe I should join the Hair Club for  Men or get Implants - but nah, I'll accept the losing hand I have been dealt).
I can't remember the last time I wore a pair of actual Jeans, it's been all Khaki's for years now.  Gone are the Combat Books (back then I only owned Combat Boots, I didn't own a single dress shoe or sneaker) but the flannel still remains.  Well, not that exact flannel but I still have one from that time period and a few others that I now occasionally wear when the weather gets a bit more brisk.

Two of these three people are still in my life.  Matt is one of the best friends that I have ever had and forces himself to vacation to this god-forsaken-hell-hole of Las Vegas that I call home once or twice a year just to see me.  I'll be heading back east this year for a visit and a trip down to the DC metro area with him to visit another old friend and catch a Washington Redskins game.  I am sure I will end up being either the best man or one of the best men at his wedding and I will prepare a speech that will make a whore blush.  I am looking forward to meeting the good woman in his life this year as well.  I miss his ugly ass more than I'll admit even though we chat and text regularly.  Unfortunately for him he was born with a very serious disorder that makes my heart ache every day he lives.  He is a Miami Dolphin fan, that poor son-of-a-bitch.

Tricia is still in my life and we have started communicating more often again.  She is on the verge of shedding the shackles of a "real" job and a boss and starting her own business and I am proud as shit of her for that! Every day that she slaves away, under paid and over worked, is another day she is closer to that dream coming true.  She lives back on the east coast still with a husband who has an awful mustache, a large nose and a horrible white boy dance.  Together they have an awesome daughter who, even at her young age, realizes that her daddy's nose is not proportional to the rest of his face :)  They have recently also introduced a dog with a bad name into their house!

Joe is no longer with us and even though we were never really great friends it saddened me the day I learned of his passing.  He was a nice guy with a big heart and I enjoyed meeting up with him during our twice a year gatherings to play the greatest board game ever made.  I am glad that I have found a few old pictures that he was in to keep his memory alive and remember the fun times we had as a group.


I was originally going to share multiple pictures, but after waxing nostalgic about just that one I realized that there was no need to share more at this moment in time.

Posted by grrouchie at 9:16 PM