Comic Books - most of us from the dork kingdom have had some form of experience with them over the years. However this is one medium that I pretty much missed out on and am now just starting to get into at my advanced age.
I don't know what it is about them that I never liked - they seemed to be perfect for me.  Maybe it was just the financial commitment that I wasn't able to afford or that most of my money went elsewhere.

In High-School I had gotten into them just a little bit but it was mostly Beavis and Butt-Head and Ren & Stimpy comics that I bothered collecting.  I can only remember one issue of X-Men that I ever bought and that one had something to do with Wolverine fighting The Hulk. 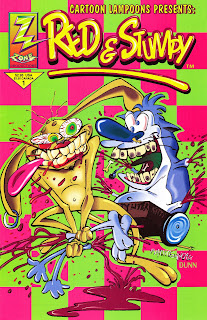 Yeah, that pretty much sums it up.  The above were already expensive enough so even if I wanted to read comic books I wouldn't have the money for it.  M:TG was by far the most expensive hobby that I had but at the time it was well worth everything I ever put into it.  The joy of opening packs, sealed deck drafts, going to big and small tournaments, driving to Columbus Ohio for Regionals every year, Pittsburgh for States, etc.  I loved every minute of it.
I cringed a little bit when I parted with some of my favorite cards even if it was for a good cause.
It hurt when I parted with my Nicol Bolas deck (even if I did buy my first car with that money) and trading away the Beta Black Lotus and my Power 9 - I still cringe when I hear what kind of value is associated with those cards now compared to when I had them.
But, time moved on and I moved to Vegas and stopped playing the game.  I still have a binder or two of some of my favorite cards at the time that I just never parted with and I look through them from time to time for nostalgia but most of the time I have no desire to ever play again (unless there is a pre-release and then I keep telling myself I should just play in those for the fun of it).

So, now I'm older and my tastes have changed again and I'm just starting to get into comic books.
It all started, innocently enough, with The Walking Dead.  I love zombies - a lot.
I know everyone was raving about the TV show and I really wanted to watch it but I was treating it like a movie that was coming out based on a book.  Most of the time I like to have read that book first so I can compare and contrast - and generally the books is better because it has more info and detail.
So, I picked up Issue 1 of The Walking Dead one day on the way to work and really loved it.  I started looking into collections on Ebay and stuff so I could catch up and that's when a Google Search turned up comixology which just happened to be releasing the first 5 volumes of The Walking Dead with a 50% off sale.  You can't beat that with a stick (you have to shoot them in the head) so I bought all five volumes hoping that I'd be able to get into the series and it wouldn't let me down.

So then I started asking around about what other comics were out there to read and what others recommend and man is the comic book universe vast.  There is just too much good stuff to catch up on and I'm really going to have to figure out a system and a budget for what I want to read and what I can afford.
My new habit is forming and it appears to be stronger than crack.
I've been grabbing a lot of free issues to give things a try and have found some good and some pretty blah. I have not settled on what exactly I want to read consistently just yet but I have found a few.

I will catch up to current production of The Walking Dead.  I love everything I have read so far.
Detective Comics have been pretty damned good for the 1st 5 issues that I have read so I will probably continue there.
I just started Vol 3 of Deadpool and he is right up my alley. I bought a few issues since they were on sale and I'm really liking what I'm getting into right now.  However, the one thing that gets me is when, during an issue, they make reference to something that happened elsewhere - in a different comic - and they tell you exactly where it was (Wolverine Origins issue #21-#25) and I immediately want to jump ship over there in those issues so that I can follow along fully.
I've got an addictive personality - when I really get into something it consumes me and I want more.  Where is my rich, loving, supporting future ex wife when I need her?

For now I think I am going to focus mainly on just The Walking Dead and Dead Pool so that I can get caught up.  Once both of those are caught up to current issues I will figure other things out from there.
If I allow myself a 3rd series then it's going to be Irredeemable which is essentially a "what if Superman went bad" with different characters of course.  I've read 3-5 of the issues and really like it. I know that the series just recently ended as the last issue came out this month so I'm hoping there is a sale that will allow me to buy a bunch of the issues cheaper than normal.
There are other series that I really want to read, Avengers vs X-Men for instance (but I'm not paying $3.99 per issue honestly) but I can catch up to them when they are released as a collection I guess.

Now, pass me a beer and my Kindle Fire and let me start reading.
Posted by grrouchie at 12:24 AM