I just got back from the gym, second Sunday in a row that I have gone.
Now if I can only figure out how to work in some other days into this routine I'll be golden (like a shower?).
Ended up doing 45 minutes on the Elliptical and burned an estimated 500 calories.  I'll accept it.  I want to be able to do 60 minutes before July is over and I don't think that's too far fetched as long as I don't push myself too hard early so that I'm struggling late.

Also, one of my Facebook Friends shared info about a Golds Gym App today where it has a picture feature where you are supposed to snap a pic of yourself after every workout and watch the progress.
I've decided that this sounds like a great idea but I'll be doing pre-work out photo's instead.
Today being day 1 I shagged 4 photo's, two in my spandex (or whatever it's called) and one in my favorite Hockey Jersey (it's your only hockey jersey ass-hat).
I bought the Jersey in 1996 I do believe, either right before or shortly after High School graduation and have been wearing it ever since.  Well, The last bunch of years it has sat in my closet because when I put it on I realize I'm way too fat for it.  (it does fit a bit better when wearing the workout spandex though). So, my other two photo's today were in this jersey so that I could track my progress over time until the day that it finally fits me properly again. 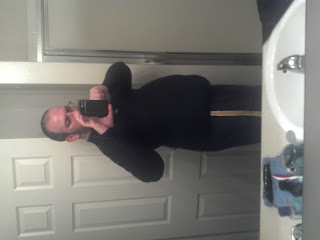 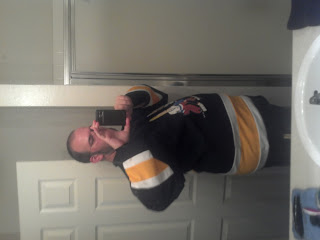 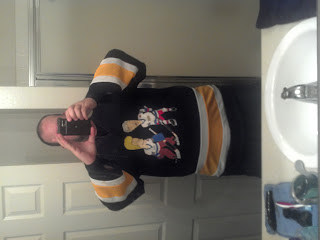 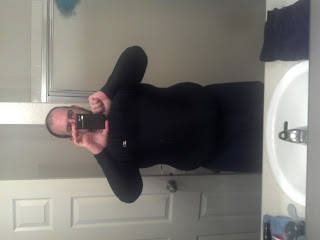 I don't know why they are sideways, maybe being so heavy has caused even the pic to rotate into a more comfortable, laying down position.

I'll try to keep these to once a week in my summary posts to show any type of progress (or regress) that might occur until I get bored and just eat a whole bag of chips or a gallon of ice cream or whatever.

Posted by grrouchie at 3:14 PM